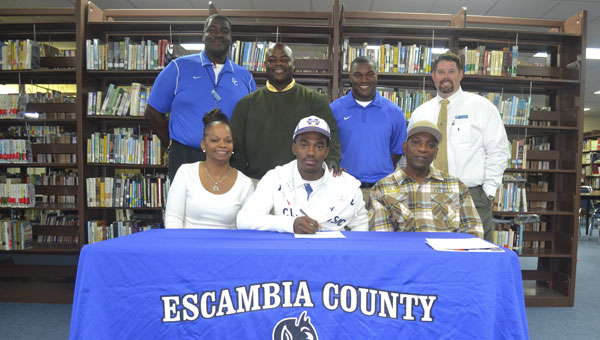 Williams officially signed with Miles College, during a ceremony held Thursday morning at the ECHS library. Family members and coaches, including his head coach Lev Holly, joined him at the signing.

“He was a team leader and was very dedicated to everything he did, both on and off the field,” said Holly, who was ECHS’s head coach from 2012-13.

Williams finished his senior season with 51 catches for 1,094 yards and eight touchdowns. He also played as a defensive back for the Blue Devils.

Holly said Williams has been asked to try out at both wide receiver and safety for Miles, a historically black college located in Fairfield, near Birmingham. Miles’ teams are called the Golden Bears, and they play in the Southern Intercollegiate Athletic Conference in NCAA’s Division II.

“Devante played both ways for us and he was a natural leader for our team,” Holly said. “He probably could have had even more yards if he’d only played wide receiver, but he did what he had to do to help our team.”

Williams said he was very excited to continue his football career. He noted that Miles had a great atmosphere and that “it was like a family.”

ECHS principal Dennis Fuqua said Williams was a great student, both academically and off the field.

“He’s very humble,” he said. “That’s not something that you see from a lot of young people these days.”