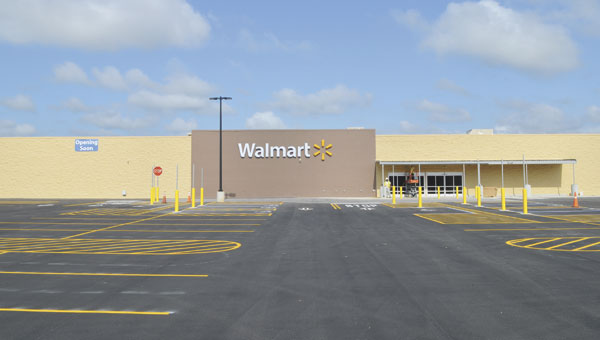 The grand opening of Atmore’s new Walmart store is set for Wednesday, Aug. 6, and according to new store manager Joe Ferguson that date is rock solid.

“It would have to take some serious circumstances for us not to open by that date,” he said.

The 70,000-square-foot retail store has been under construction since December 2013. Although some rainy weather delayed the initial construction, Ferguson said the crew has been able to make back the lost time.

“We are actually completed with most of the main structure,” Ferguson said. “Right now we’re just fine tuning some things. The crew really kicked it into high gear these last few months.”

This will be the first store manager position for Ferguson, who previously served as the shift manager at the Daphne store for two years. He has been with Walmart for 15 years, and his first job was as an hourly employee for the company.

Ferguson said he has enjoyed getting acclimated to life in Atmore. He likes to wear his Walmart employee tag in public, and is always ready to answer any questions citizens might have about the new store. 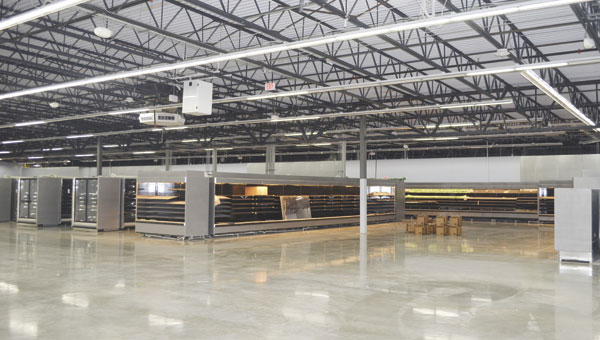 The produce section will greet shoppers to their right as they enter the store.

“I’ve been overwhelmed at the reaction that I have seen out in the public,” he said. “The positive vibe that I am getting is impressive. It feels great to be a part of a community where they’re really excited about getting a brand new store like this.”

Ferguson said the store will likely open with about 150 employees. It will be open 24 hours, seven days a week.
Atmore’s Walmart will not have an auto care center, fine jewelry department, or any space that is leased to other businesses (such as nail salons, barber shops, restaurants and the like). It will still have a full grocery department, a garden center, pharmacy and all the other departments that shoppers are used to seeing in Walmart, Ferguson said.

“This is a brand-new design that Walmart is opening in several markets at about the same time,” he said.

“Atmore will be the third store that the company is opening with this size and configuration.”

For more on this story, see the Wednesday, June 11, edition of The Atmore Advance.