Cougars get ready for 2014 season 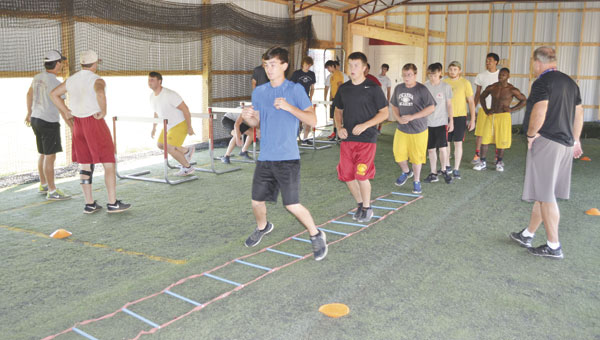 Escambia Academy coach Hugh Fountain knows that his Cougars will have to face many hurdles and obstacles during its 2014 football season. So it should come as no surprise that EA’s football players often jump over real hurdles during their summer workouts.

EA began its summer program on Monday, June 2, and the players have been working out every Monday, Tuesday and Thursday since. Players have a choice between working out at 8 a.m. or 6 p.m., and there is also a 10 a.m. workout time for middle schoolers.

The workouts are typically about two hours long, and include weightlifting, plyometrics (jump-related exercises) and speed work, and conditioning drills. Although players only have to make one of the workout times each day, some voluntarily attend both.

“We have had good effort and participation so far,” said Fountain, whose team went 10-3 last year and advanced to the second round of the AISA Class AAA playoffs.

Fountain said the summer program would continue until the start of fall football practice, at the end of July. Players are required to make as many workouts as they can.

“We don’t have a percentage of workouts they have to make,” he said. “Ideally, I’d like 100-percent participation, but obviously we know that people have vacations and trips with their family. Our motto is ‘if you’re in town, then you need to be at the workouts.’

“We can work around vacations, as long as we know when they’re going to be.”

Fountain said there are about 66 kids who are currently participating in the summer program, ranging from middle school through varsity.
He said he believes that a team gains its greatest strength and stamina in the summer workout season, because the responsibilities of school and practice are not present.

“Conditioning routines like this help kids get rid of bad habits,” he said. “If they’re working out, then they’re not sleeping in till noon or spending all day playing video games.”

Fountain also noted that it is important for the entire team to take the workouts seriously, and for the most part the Cougars have done that.

“If only one player is working hard, but five more are not, then you haven’t gained anything,” he said. “That one player might be improving, but the team is not. One of the things that we try to stress to the players is that every day is not going to be a great day, but every day is a day where you can work a little bit more to get a little better.”

Several EA players have also attended position-specific camps in order to improve their skills, Fountain said. The team had planned to participate in a camp at Troy University earlier this month, but it was rained out.

EA will participate in at least two 7-on-7 competitions during July, and likely will have a few more players attend camps in the summer as well.

Fountain has more than 25 years of experience as a football coach, and said that he has tweaked the summer workout program at least a little each year. He noted that the fundamentals remain mostly the same, but it is important to keep the drills fresh.

“I like to say that it’s always a work in progress,” he said. “I think that the basic fundamentals and goals of a summer program have remained essentially the same. It’s just the method of getting it out of the kids might have changed.”