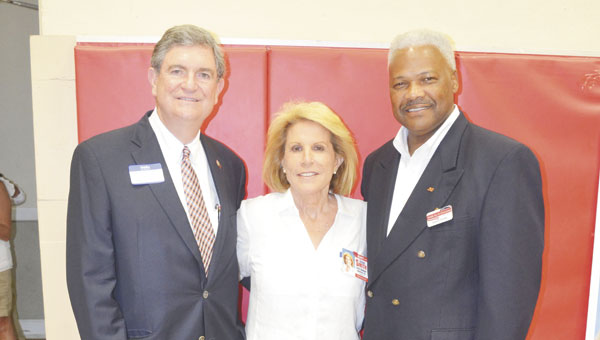 Susan Smith is joined by State Sen. Billy Beasley and James Fields, who is running for lieutenant governor, at Friday’s kickoff.

Smith, an Atmore City Council member, is running as a Democrat for the open seat in District 22. Democrat Marc Keahey had held the seat, but chose not to run for re-election.

Smith will face either Republican candidate Greg Albritton or Harry D’Olive in the general election in November.

On Friday, nearly 100 supporters filled the auditorium at the Atmore Area YMCA, where Smith and other Democratic candidates discussed her campaign.

Smith said she appreciated Friday’s show of support, and vowed that she would be a senator who speaks for the entire community.

“Let’s get out and vote. Let’s make it happen,” she said. “And we’ll come back and have a victory party in Atmore like they’ve never seen.”

Several Atmore citizens attended the Atmore City Council meeting on Monday, where they voiced their concerns about the recent announcement... read more