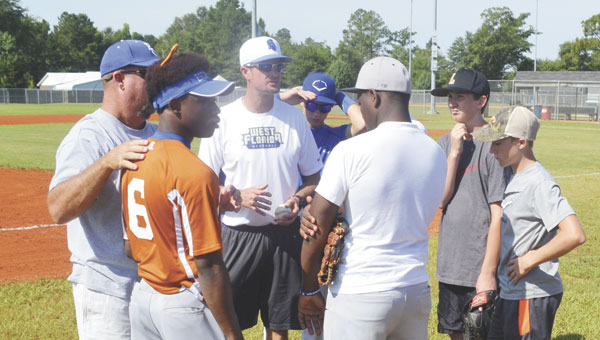 UWF won the NCAA Division II baseball championship in 2011, and ECHS head baseball coach Michael Parker said it was a great opportunity for the Blue Devils to learn from a strong group of coaches.

“The fundamentals of the game of baseball are the same, but it’s special for our guys to learn from a group of coaches who have had success at the next level,” Parker said. “It reinforces what their high-school coaches are trying to teach them.”

Parker said that the school was able to use a grant through the 21st Century Community Learning Center’s “Project REAL” program to help pay for the camp and transportation costs. Thanks to the grant, Atmore-area students were able to ride the bus to camp on the days it was held in East Brewton.

Parker said that the school has previously used the grant to pay for volleyball camps and games, but this was the first time the grant money was used for baseball.

“This was a great opportunity for our school and team,” he said.

Jeffcoat noted that the camp was also a positive for UWF, because it allows the university to give its baseball program more exposure throughout the region. This is the first year that UWF has offered satellite baseball camps for high schoolers.

“It’s been a long and full camp,” he said. “We’ve been coaching them on hitting, fielding, pitching, fundamentals, and team defensive play. We’ve also been trying to focus on those little things that can make a big difference between winning and losing a game.”

Jeffcoat also said that he and his coaches tried to make time to impart some life lessons to the players, as well.

“Obviously a lot of what we taught them was about baseball, but we also tried to teach them about good character and values,” he said. “We challenged them to be ‘uncommon’ and to always strive to be more and do more.”

Atmore’s 10-under Cal Ripken All-Stars had an impressive showing at the state tournament in Rainbow City, finishing in second place... read more