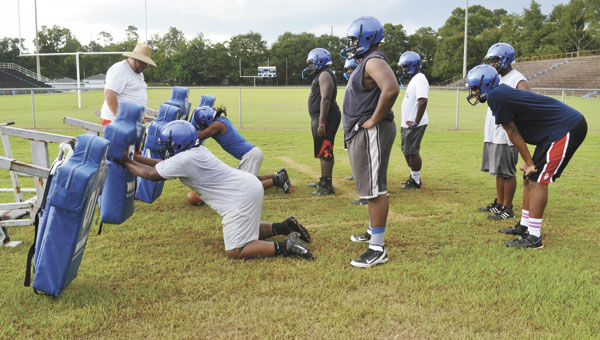 ECHS assistant coach B.J. Baker watches as several players practice their line technique with the blocking sled during Monday’s practice. Monday was the first day that high-school teams are officially allowed to practice together in Alabama.

The 2014 season is going to be one full of change for the Escambia County High School Blue Devils — new coach, new schedule, and new rules for fall practice.

ECHS opened its practice schedule Monday, working out in shorts and helmets and primarily focusing on special teams. Monday was the first day that Alabama teams are allowed to practice together as an entire team.

Royce Young, who is beginning his first season as head coach of the Blue Devils, said that the Alabama High School Athletic Association (AHSAA) has established some new regulations for practice in the 2014 season.

First, teams can no longer have two consecutive days of “contact drills,” he said. He said that if a school elects to have a “two-a-day” practice, they must be at least four hours apart and the players can only wear pads at one of the two practices.

“There are a number of new rules this year,” said Young, who was hired in January and replaces Lev Holly. “It’s all about the kids’ health and heat. Every team has the same rules to follow, so you hope that it keeps things at a level playing field.”

Young said he and his coaches are keeping the heat in mind as they scheduled their practices. The team will typically either practice in the early morning, or in the afternoon after 5 p.m., avoiding the hottest parts of the day.

Young said that teams are not allowed to have practice in full pads until Monday, Aug. 11. This week, the Blue Devils will practice in helmets and shorts on Monday and Tuesday, and they will then move to “shells” on Thursday and Friday. Shells are helmets, shorts, and shoulder pads only.

Because there is limited contact allowed, Young said the first week is a good time to focus on special teams.

“Our goal is to get as much special teams work done as we can this week,” he said. “Then starting next week, we’ll be able to work on a lot more of our playbook and drills.”

The Blue Devils will not play in a preseason jamboree game this year, and instead will open their season Friday, Aug. 22, at Baldwin County. They will play 10 games.

ECHS is also facing a new slate of region opponents, as the Blue Devils have moved up to Class 5A. They are participating in Region 1, against Vigor, B.C. Rain, Jackson, Faith Academy, Williamson and St. Paul’s. None of these teams were in ECHS’s region the last two years, and only Faith Academy was on the Blue Devils’ 2013 schedule.

The Blue Devils’ complete 2014 schedule is as follows: