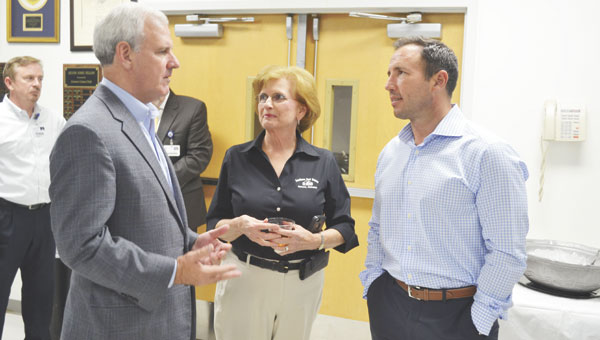 U.S. Rep. Bradley Byrne talks with Debbie Rowell and Robbie McGhee during his visit to Atmore Community Hospital on Monday.

U.S. Rep. Bradley Byrne visited Atmore on Monday, where he toured Atmore Community Hospital and met with hospital board members and employees to ask them their concerns about health care and other issues.

Congress is currently in a recess, and Byrne is using the time to visit every rural hospital in his district.

“You’re doing things here that are extremely important to the health care and quality of life of your citizens,” Byrne said. “I’m very impressed with what I’ve seen at this facility.”

Ruth Harrell, chairperson of the Coalition for a Healthier Escambia County, said that she was concerned that the federal government was trying to put hospitals out of business. She said the problems began back in the 1980s, when the government changed the way it reimburses hospitals for care through programs like Medicare and Medicaid.

Byrne said he was concerned that the federal government has gotten too involved in the health care, and one of the first solutions would be to repeal Obamacare.

“It’s my personal view that we need to repeal the president’s health care law and replace it with something better,” he said. “Otherwise, the problems you described are just going to get worse.”

William Grissett, chairman of the Escambia County Hospital Board, asked Byrne if Gov. Robert Bentley would ever change his stance on Medicaid expansion. Bentley was one of 20 Republican governors who opted out of the Affordable Care Act (also known as “Obamacare”) provision to expand Medicaid to all citizens within 138 percent of the federal poverty level.

Estimates suggest that as many as 300,000 additional Alabamians would qualify for health insurance under Medicaid if Bentley would approve the expansion.

Byrne said that the state’s general fund budget was already at its breaking point, and trying to expand an existing program like Medicaid is simply not feasible.

“Medicaid and our state prisons are paid out of the state general fund, which has no growth,” he said. “[Alabama] can’t even pay for the Medicaid program they’ve got, so it wouldn’t be prudent to talk about expanding it.”

Stephanie Bryan, tribal chairperson of the Poarch Band of Creek Indians, thanked Byrne for the support he has shown the tribe throughout the years.

“You have always been an advocate for our tribe, for Atmore and for Escambia County,” she said.

Byrne also addressed several other issues of local and national importance. He said he continues to fight for a project that would four-lane U.S. Highway 31 from Brewton to Bay Minette.

He also expressed his concern with the Islamic State in Iraq, and voiced his support for the U.S. military to do whatever needs to be done to handle the threat there.

“The best time to destroy [the Islamic State] is right now, not when they get stronger,” he said.

County to fund shelter through Aug. 30

The claws came out in a debate Monday over whether or not the Escambia County Commission should pay the Humane... read more