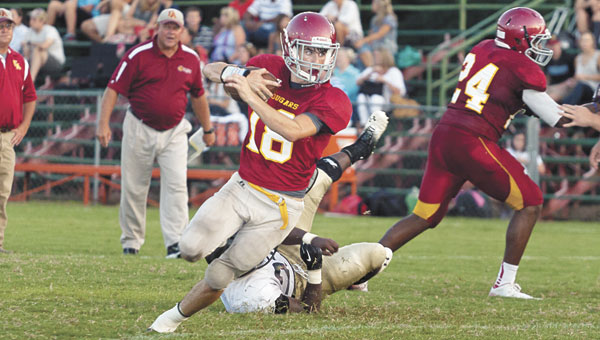 Escambia Academy coach Hugh Fountain said his team enjoyed getting the chance to face a pair of talented opponents, during Friday night’s scrimmage at Glenwood School in Smiths Station.

“AISA allows you to do these practice scrimmages if you don’t play a preseason game,” Fountain said. “It’s basically an opportunity to play someone other than yourselves, and I think our kids were looking forward to it.”

The Cougars faced off against two schools from Georgia — Deerfield-Windsor and Southland Academy. No scores or statistics were kept for the scrimmage. EA did not play Glenwood, as the teams will meet during the 2014 season.

Fountain explained that the scrimmage was set up to allow each team to play on both offense and defense. First, EA got the chance to run 20 plays with its first-team offense, then its opponent got the chance to have 20 plays on offense.

Later, the teams continued to rotate on offense and defense, allowing every player to see the field.

“We took about 44 players up there and I think it was a productive night,” Fountain said.

The Cougars were hampered some on offense, as four projected starters were out with injuries. Fountain said the injuries hopefully would be cleared up before the start of the regular season, on Friday, Aug. 29.

“There were a lot of players who were in positions that they normally wouldn’t play,” Fountain said. “We did some good things. We’ve still got to execute better and get in better shape, and we’ve only got two weeks to do that.”

EA had hoped to play Restoration Academy in a game this Friday, but Fountain said the teams were unable to fit it into their schedules. The Cougars were forced to re-shuffle their schedule after a planned Aug. 22 game against Northview was canceled.

Fountain said EA would instead have a “Meet the Cougars” night this Friday at 6 p.m. at Bachelor Field. Fans will be able to meet the football players, as well as the cheerleaders and some other athletes.

The Cougars will open their regular season at home Friday, Aug. 29, as they travel to Autauga Academy for a Class AAA, Region 2, game.

ECHS opens at Baldwin on Friday