ECHS opens at Baldwin on Friday 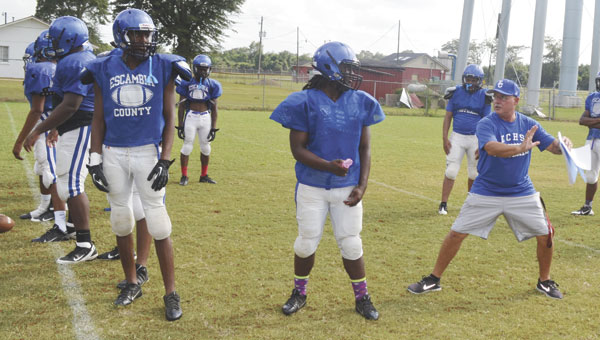 After months of practice, summer workouts and film sessions, the Escambia County High School Blue Devils will get the chance to open their regular season Friday night.

The Blue Devils will travel to Bay Minette to take on the Baldwin County Tigers, at 7 p.m. It is the opening game for both teams.

“I’m sure if you’d ask any of our football players, they’ll tell you that practice is starting to become a grind and they’re ready to play a game,” ECHS coach Royce Young said. “And then, if you ask the coaches, they’ll say that they’re never ready and there’s always things you can work on. But we’re excited about the chance to get our season started Friday and hopefully it’ll be a great game.”

Young explained that the team could have elected to play a preseason jamboree game this Friday, but their schedule was already set months in advance. ECHS’s last game-like activity was a spring jamboree against Flomaton and McKenzie in May.

“Obviously it might have been nice to have a preseason game where you can work out some of the kinks, but the schedule is what it is,” he said.

“Baldwin County is the same way; they haven’t had any scrimmage or anything, so we’ll both be getting our first game action Friday night.”

Young said that practice this last week will be mainly about fine-tuning the team’s execution and fundamentals.

“We’re kind of to the point where it’s almost too late to put in any new schemes or formations,” he said. “We’re going to try and work on the things we know right now, until we can get them perfect. We don’t want to confuse the kids by throwing something new at them that they’ve never seen before.”

The Blue Devils have a daunting schedule ahead of them in the 2014 season, including three region games against teams ranked in the Top 4 of the Class 5A preseason poll. Young said Friday night’s game against Class 6A Baldwin County will be a good warm-up for that tough Region 1 slate.

“Certainly as a coach you want to win every game on your schedule,” he said. “But the nice thing is that Friday night’s game isn’t a region game. Even if you lose it, it doesn’t affect your ability to make the playoffs.”

The son of an Atmore man was recently named the linebackers coach at Huntingdon College in Montgomery. Josh Linam was... read more