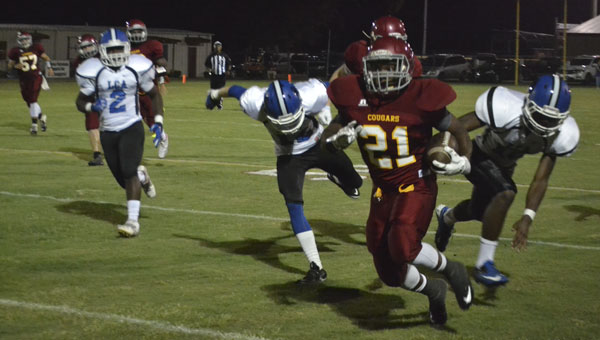 Escambia Academy defeated visiting Lancaster Christian Academy, 55-18, Friday night, in a game that did not finish until 10:37 p.m.

The start of the game was delayed until 7:30 p.m., in order to give the visitors enough time to arrive from Smyrna, Tenn. Then, there was a delay in play when the referees postponed the game at 8:30 p.m. when lightning was spotted in the area.

“I thought our team did a good job of playing through some of the distractions tonight,” EA coach Hugh Fountain said. “I thought our defense especially played well.”

The Cougars led 41-0 at halftime, and did not allow LCA (0-3) a first down until the third quarter.

For more on this story, see the Wednesday, Sept. 10, edition of The Atmore Advance.