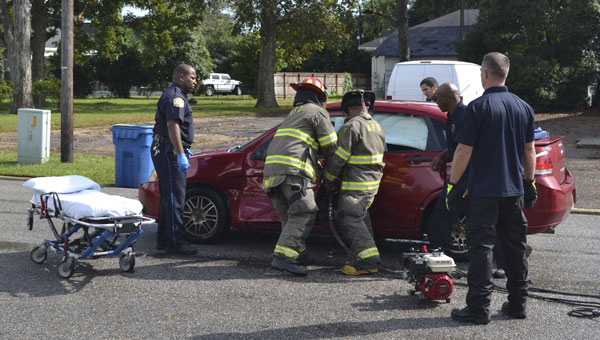 First responders work to remove the driver of a Ford Focus after a crash Thursday afternoon at the intersection of Main Street and Owens Street.

Both occupants of the Focus both sustained head injuries, Vickrey said. The passenger and driver, whose names were not immediately available, were transported by ambulance to the Atmore Community Hospital.

First responders had to use equipment to extricate the driver from the vehicle, but Vickrey said she was conscious.

There were four people in the Silverado, but none were injured and the vehicle was drivable after the crash, Vickrey said.

Earle’s Jewelers was named the Business of the Month for October. The Atmore Area Chamber of Commerce has named Earle’s... read more