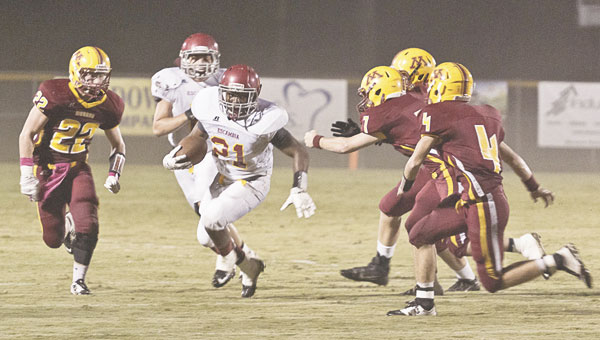 EA running back Gordon Brooks had three touchdowns in Friday’s 51-0 win for the Cougars.

The Cougars got off to a very fast start Friday night, taking a 32-0 lead after just one quarter.

EA’s Kris Brown returned the opening kickoff 95 yards for a touchdown, and Scott Brantley intercepted a pass on the Senators’ first drive of the game. Brown scored on a 40-yard touchdown run to increase EA’s lead to 12-0.

“Anytime you can open a game with a kickoff return for a touchdown, that’s a great way to start,” EA coach Hugh Fountain said. “We got off to a great start and our defense was strong all night — we only allowed minus-1 yards of rushing.

“We were able to play our backups a lot in the second half, which was good for us.”

The Senators then threw another interception, which was returned by EA’s Kainoa Gumapac to give the Cougars strong field position.
Brett Gorum eventually scored on a 5-yard run, increasing the EA lead to 32-0.

Brooks scored his third touchdown of the game in the second quarter, on a 33-yard run. Gumapac completed a 31-yard touchdown pass to Gary Campbell late in the quarter to give the Cougars a 45-0 lead at halftime.

EA added one more touchdown in the fourth quarter, when Fred Flavors scored on a 7-yard run with 2:34 remaining.

The Cougars host Pike Liberal Arts on Friday in the final region game of the season. It is also EA’s homecoming. Kickoff is at 7 p.m. at Bachelor Field in Canoe.

MOBILE — The Blue Devils got off to a strong start Friday night, but couldn’t keep the momentum up, as... read more