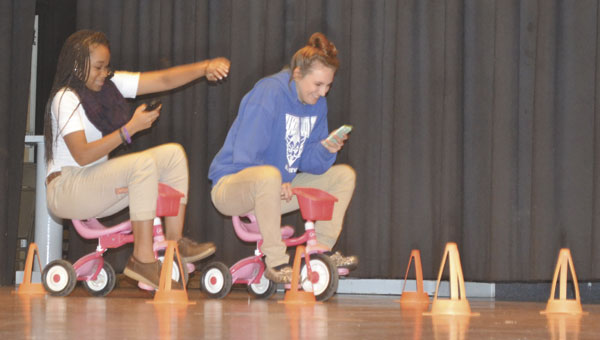 ECHS students Kendal King and Cheyenne Chafin try to pedal a tricycle while sending a text message, during an activity at Thursday’s “It Can Wait” program.

Kenneth Jernigan of Century visited the school Thursday morning for a program sponsored by the JAG (Jobs for America’s Graduates) organization. Jernigan’s son, Kenneth Wade Jernigan, was killed in a car crash on Dec. 7, 2011. The 16-year-old sophomore at Northview High School was sending a
text message when he wrecked his vehicle.

“You cannot drive a vehicle while looking at a phone,” Jernigan said. “I don’t care how good of a driver you are.”

Jernigan said that he knows it is tempting to use a phone while driving, but noted that it only takes one mistake to ruin a life.

“It wasn’t going to happen to my son! He was a great driver! But it did,” he said. “You’re taking a chance, just like putting a gun to your head and pulling the trigger.”

Jernigan said he is not a professional speaker, but “just a father from Century” who wants to make sure nobody else has to deal with a similar tragedy.

“There’s no text message in the world important enough to kill yourself or kill anyone else,” he said.

The students also learned several notable facts about texting while driving, through AT&T’s “It Can Wait” campaign. For example, 97 percent of teenagers agree that texting-while-dangerous is dangerous, but 43 percent admit to doing it anyway.

In addition, 90 percent of teenagers expect a reply to a text or email within five minutes or less, putting additional pressure on them to reply while driving.

As a result, AT&T has started the “#X” campaign, which recommends for teenagers to send a simple text message of “#X” to let their friends know they have to drive now.

Also during Thursday’s program, students participated in a variety of activities to show how difficult it is to multitask while text messaging. In one activity, they had to juggle balloons in the air while sending a text message, and in another they had to pedal a tricycle through cones while being distracted by a cell phone.”

The headline performers, “The Alabama Blues Women,” show off their musical talent at the main stage Saturday afternoon. The blast... read more