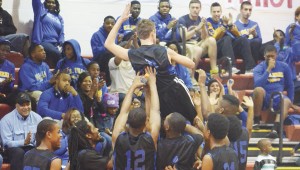 ECHS players lift Stephen Busby for a standing ovation after he hit a three-pointer against Flomaton earlier this month.|Photo by Adam Robinson, For The Advance

While Escambia County High School celebrated its seventh straight boys basketball county tournament championship earlier this year, the biggest celebration may not have been in the final game of that tournament.

On Friday, Dec. 12, the Blue Devils were playing Flomaton at T.R. Miller High School. ECHS eventually went on to win the game by the score of 73-36, allowing every member on the team to see action on the court — including Stephen Busby.

Busby is a reserve player on the ECHS varsity team. ECHS coach Terrence Walker said the game against Flomaton was his first time to dress out for the varsity team; he had previously only played on the junior varsity team.

“He came in with about a minute and 30 seconds left to go in the game,” Walker said. “When I told him to go in for a player, he was so excited that he ran on to the court and I had to pull him back to sit under the scorer’s table. That is how happy he was to get into the game.”

Walker said that Busby missed his first two shot attempts in the game, but on the third one he drained a 3-pointer.

“Everybody went crazy and the entire gym was on their feet,” he said. “He then took off down the court, ready to play defense.”

Walker said Busby’s shot was a highlight of the entire tournament, and was well deserved for a player who works hard.

“After the game, our players picked him up so the fans could give him a standing ovation,” he said. “He was happy the entire night and could not stop talking about how he hit the three.

“He even pointed out that he had hit a 3-pointer before any of the starters in the game, and that had the whole team laughing. We are proud to have Stephen Busby as part of the Blue Devils basketball team.”

Eli Gold and Scott Hunter entertained the PCI sports banquet with stories about Alabama football. A trio of University of... read more