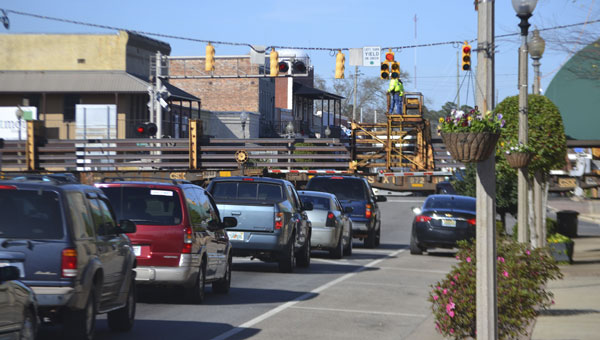 Traffic was diverted on Main Street on Monday afternoon, as CSX Corporation employees performed maintenance on the tracks.

The CSX Corporation performed some maintenance on its tracks this week, slowing traffic through busy downtown intersections.

The work began Monday afternoon and continued through Tuesday. At several points, traffic was detoured away from major railroad crossings, including the one at the intersection of U.S. Highway 31 and Main Street.

Kristin Seay, a spokesperson for the CSX Corporation, explained that the work was the first phase in replacing the existing tracks.

Seay said that CSX Corporation employees were unloading the replacement tracks Monday and Tuesday, but did not actually install them. Instead, they dug 12-inch-deep trenches near the existing tracks, and temporarily buried the new replacements in those trenches.

Ballast has been used to cover the trenches and buried rails, so that motorists can continue to travel over the railroad crossings.

“It may be bumpy at times, but you will still be able to drive safely over the crossings,” Seay said.

Seay said that the first phase of the project should be completed by the end of Wednesday, Jan. 7, at the latest. The actual installation of the new rails is scheduled for some time in February.

Motorists should use caution at area railroad crossings whenever workers are present, she said.

The driver of this Dodge Grand Caravan was injured and transported to North Baldwin Hospital, after a Monday morning crash... read more