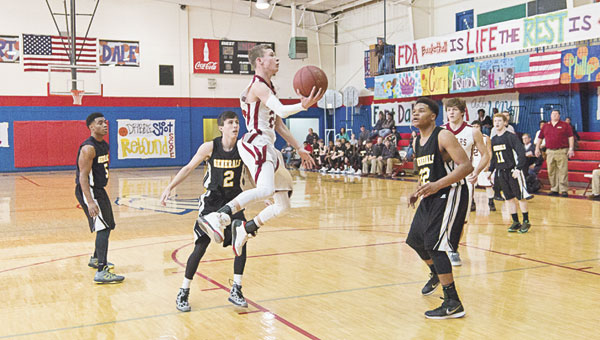 Escambia Academy’s Tyler Sells drives to the basket during EA’s 60-49 win over Autauga Academy.|Photo by Ditto Gorme, For The Advance

The Cougars advanced to the “Elite 8” Class AAA quarterfinals. They will travel to Huntingdon College to face Glenwood on Thursday at 7:30 p.m.

The Region 2 tournament was played at Fort Dale Academy in Greenville. In the consolation game Saturday, EA defeated Autauga Academy by the score of 60-49.

Garrett Kirk led the Cougars (13-11) with 19 points and 14 rebounds in the victory. He also finished with six blocks.

EA’s boys lost their opening game of the region tournament Friday night, falling to Pike Liberal Arts by the score of 45-42.

Escambia Academy’s Lady Cougars were eliminated by Hooper Academy in the Region 2 tournament, ending their season.