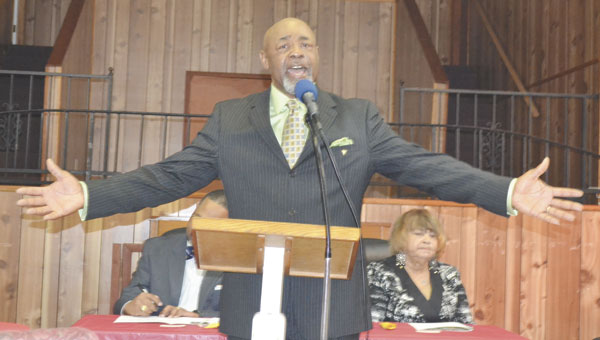 Atmore citizens of all races, ages, churches and genders came together Saturday to celebrate the legacy of Rosa Parks.

The 10th annual Rosa Parks Breakfast was held Saturday morning at Greater Mt. Triumph Missionary Baptist Church’s fellowship hall. The event is sponsored annually by Lillie Johnson and her committee of volunteers, who offer the free breakfast to all Atmore citizens 16 years or older.

The event is always held near the Feb. 4 birthday of Rosa Parks, who is considered as one of the prominent figures in the history of the civil rights movement. Parks’ refusal to give her bus seat to a white passenger on Dec. 1, 1955, sparked the Montgomery bus boycott and helped spark the eventual end of segregation and Jim Crow laws.

Bracy discussed several recent national current events in which he felt black citizens were not always treated fairly, including the deaths and related court trials of Trayvon Martin, Michael Brown and Eric Garner. He also expressed his concern about recent legislation that has been passed, including one bill that removed Section 5 of the U.S. Voting Rights Act.

Bracy said that Section 5’s removal means that the U.S. Dept. of Justice no longer has to sign off on any changes to Alabama’s voting districts. He also questioned the intelligence of the state’s recent law requiring ID in order to register to vote.

“How can somebody tell you that you need a state ID to vote, when you don’t even need an ID to get the state ID,” he asked.

Bracy said that he believed one way to avoid more conflicts like the one that sparked riots in Ferguson, Mo., was to ensure that all officers wear body cameras.
However, Bracy also admitted that minority communities needed to blame themselves for some of their problems. He said he was disappointed at the large number of black citizens who remain on the welfare rolls, do not exercise their rights to vote, and do not participate in jury duty.

“When (black Americans) do things like this, we’re putting ourselves on the back of the bus,” he said. “Men tell me all the time that they want to help their family and make a living, and then they show up and fail the drug test.

“Our priorities are all mixed up, and we’ve got to change them to succeed.”

Prichard Mayor Troy Ephraim was the master of ceremony for the breakfast, and Atmore Mayor Jim Staff joked that he “used to work on cars for him.” Ephraim’s cousin is Greater Mt. Triumph pastor Rev. Willie Hawthorne, and he has several other family members in the Atmore area.

“We’ve come a long way, but we’ve still got a long way to go,” said Staff, noting that race relations in Atmore have been mostly peaceful.

“Many of us today would not be standing where we stand, if she had not chosen to sit down,” Smith said, of Parks’ courage. “She not only confronted a bus driver, but she confronted the law and confronted history. And for that, we are all thankful.”

Dorothy McCorvey introduced Bracy, her cousin, and Johnson provided remarks at the end of the breakfast.