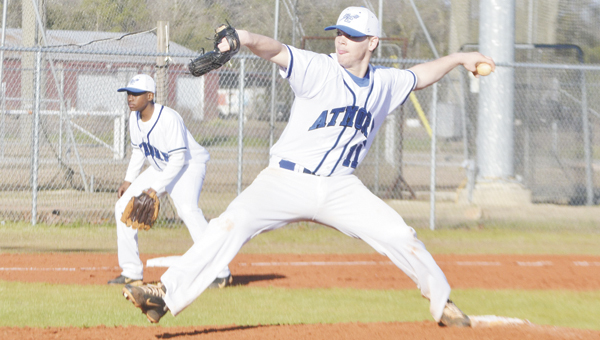 “The team could have laid down three nights in a row, but they really came back and played hard tonight,” Parker said Friday. “We played three really good teams at this tournament.”

In Friday’s game against Flomaton, ECHS took an early 1-0 lead after one inning. Gaetyn Thames singled to lead off the inning, and then stole second base. Thames moved to third on a groundout, and then scored on a sacrifice fly by Tanner Smith.

Smith provided strong pitching on the mound for the Blue Devils, striking out 10 batters in his first four innings. All three runs Smith allowed were unearned.
After Smith ran into trouble in the top of the fifth, Brandon Cummings came on in relief. Cummings faced a bases loaded, no outs, situation, but then struck out two batters and forced the last out at home plate on a groundout. Cummings pitched three innings of scoreless ball.

“We had some very good pitching tonight,” Parker said. “We were hurt a little today because we were missing two starters — one was sick and one had a school function.”

ECHS had a great chance to rally in the bottom of the sixth inning. Smith reached on an error to lead off the inning, and Cummings’ sacrifice bunt moved him to second. The next batter, Bobby Ephraim, also reached on an error, putting Smith at third and Ephraim at second with one out.

However, the Blue Devils’ rally fizzled from there, as the next two batters struck out with the potential tying runs in scoring position.

ECHS was set down in order in the bottom of the seventh inning.

“We made better contact with the ball tonight than we have in a while, but our offense still isn’t where it needs to be,” Parker said. “We’ve definitely got a lot of work to do.”

T.R. Miller, Flomaton and W.S. Neal all finished 2-1 at the tournament, and Neal defeated Miller 10-9 in the tournament finale. However, Miller won the county tournament based on the tiebreaker, which was fewest runs allowed.

The Blue Devils will host W.S. Neal on Friday at 5:30 p.m., and travel to face Monroe County on Monday, March 9.

The Pensacola Blue Wahoos will visit the Atmore area on Tuesday, April 7, for a special spring training. The Blue... read more