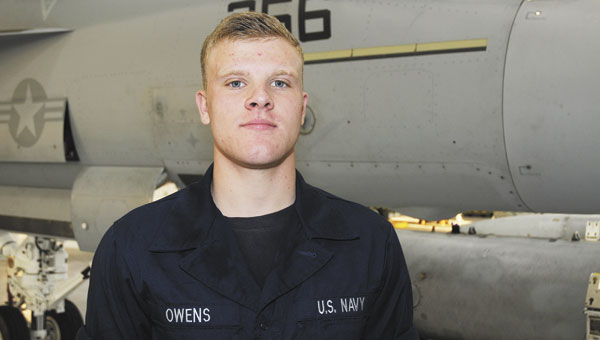 Airman Willie Owens, of Atmore, serves with one of the U.S. Navy’s most lethal strike fighter squadrons.

A 2014 Northview High School graduate and Atmore native is currently serving with the U.S. Navy’s Strike Fighter Squadron 122, also known as the “Flying Eagles”, stationed at Naval Air Station Lemoore, according to a release from the Navy Office of Community Outreach Public Affairs.

Airman Willie Owens is an aviation ordnanceman with the squadron, which the Navy designates as VFA-122, and works with the Navy’s most lethal and versatile strike fighter aircraft, the F/A-18E/F Super Hornet.

“I am responsible for handling and maintaining the F/A-18 Super Hornet weapons systems,” Owens said.
The Super Hornet takes off from and lands on Navy aircraft carriers and is capable of conducting air-to-air combat as well as air-to-surface combat. It is approximately 61 feet long, has a loaded weight of 51,000 pounds, and a max speed of 1,190 mph.

Operating from the sea aboard aircraft carriers, the Super Hornet gives the Navy the power to protect America’s interests anywhere, at any time. The versatile jet has the ability to destroy targets located hundreds of miles inland, without the need to get another country’s permission to operate within its borders.

“I enjoy the people and learning experiences the most,” Owens said.

Owens said he is proud of the work he is doing as part of the squadron’s 1,140-member team, helping to protect America on the world’s oceans.

“My job trains the pilots to fly with and operate the weapons systems on the Super Hornet,” Owens said.

Sailors’ jobs are highly varied in VFA-122. Approximately 220 officers, 660 enlisted and 260 civilian men and women make up and keep all parts of the squadron running smoothly — this includes everything from maintaining aircraft airframes and engines, to processing paperwork, handling weaponry, and flying the aircraft.

“The sailors here are the epitome of a team,” said Cmdr. Ernie Spence, VFA-122’s commanding officer. “Everyone here is professional, skilled in their job, and they are great team players which enables us to accomplish our mission.”

The Flying Eagles are the Navy’s West Coast Fleet Replacement Squadron for the F/A-18E/F Super Hornet. They train aircrew and maintainers to prepare them to go to the fleet and join the squadrons that fly the Super Hornet. VFA-122 trained aircrews have flown combat missions in support of Operation Iraqi Freedom, Operation Enduring Freedom, and Operation Inherent Resolve.

“I’m proud to be in the Navy and I’m glad I’m serving my country,” Owens said.

Competitors will vie for $12,000 in cash and prizes at Wind Creek Casino & Hotel Atmore (WCA) on Saturday, March... read more