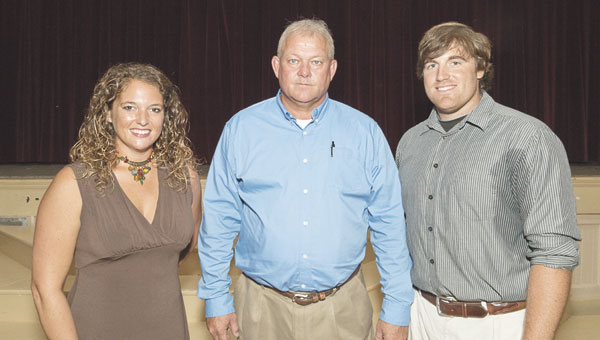 Escambia Academy has hired new coaches for its baseball and softball programs.

Jeffrey D. Price Jr. is the new EA baseball coach, and Allie Park will be the new softball coach.
Price graduated from EA in 2009, and then played baseball as a pitcher at Faulkner State from 2010-12, and at the University of Mobile from 2012-14.

He is ranked fifth all-time in school history for ERA, and was a member of the all-conference team.

Park is a 2005 graduate of Charles Henderson High School in Troy, and has six years of coaching experience. She previously coached at Pike Liberal Arts in Troy, from 2013-15, and also has coaching stints at Hooper Academy (2012-13) and Clayton High School in St. Louis, Mo. (2009-11).

Park was named the Super 12 Player of the Year in 2005 at Charles Henderson. She played at Central Alabama Community College from 2005-06, and at Webster University from 2006-09.

ECHS football coach Royce Young shows the proper technique to some of his players during Monday’s offseason workout. Even though... read more