A 66-year-old Atmore man was arrested Tuesday, in connection with a shooting at the State Farm Insurance Company building on East Church Street.

According to information released by the Atmore Police Department, Jerry Reed, 66, of Atmore, was arrested on warrants of criminal mischief I and shooting into an unoccupied building. Both carry felony convictions, if he is found guilty. 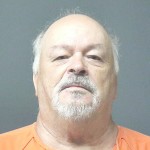 The U.S. Marshals Fugitive Task Force, as well as investigators and officers with the APD, assisted with Reed’s apprehension. He was arrested and transported to the Escambia County Detention Center in Brewton, without incident.

According to the APD, officers first responded to a call at State Farm Insurance Company, 302 E. Church St., at approximately 8:30 a.m. on Tuesday, June 30. The call referenced damage to the front of the building.

Employees told officers that they noticed the damages as they arrived for work that morning, and that it appeared someone had shot into the building with a firearm.

Investigators determined that a small-caliber weapon had been used to create the damage to the front of the building, which was unoccupied at the time of the shooting. Both front windows and the glass door appeared to have been hit by bullets.