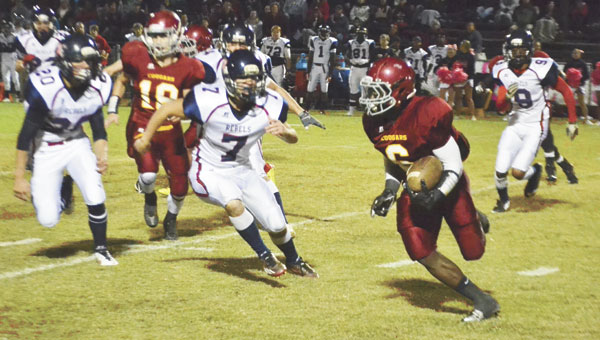 Escambia Academy’s Kris Brown runs with the ball during a regular season game against Bessemer Academy last year. EA will face five teams ranked in the AISA Top 10 preseason poll in 2015, including Bessemer Academy.|File photo by Ditto Gorme, For The Advance

Escambia Academy’s success in 2014 has attracted the attention of the state’s sportswriters, who recently voted the Cougars the No. 3 team in the Alabama Independent Sports Association (AISA).

EA will play Edgewood, the defending AISA Class 2A champion and owners of a 58-game winning streak, in the opening game of the season Friday, Aug. 21. The Cougars will also host Bessemer Academy on Oct. 30.

“I don’t really feel like the rankings mean anything at this point in the season,” EA coach Hugh Fountain said. “Obviously it’s a nice honor for our school to get that attention, but it doesn’t have any bearing on what the team will do this year.”

Fountain said he did not feel slighted that Bessemer was ranked ahead of EA, despite the Cougars’ victory over the Rebels in the 2014 title game.

“Bessemer’s got a good program,” he said. “It’s not important where we’re ranked right now.”

Fountain noted that EA would have plenty of opportunities to prove it is worthy of its lofty ranking. In addition to the games against Edgewood and Bessemer, the Cougars also play three other games against ranked teams.

“Now that we’ve been to the championship game and been to the playoffs several years in a row, we won’t be able to sneak up on anyone,” Fountain said. “We’ll have a big target on our backs. But I think our team is prepared for the challenge.”

Two other Escambia County teams were also ranked in the preseason poll. Flomaton was No. 6 in Class 2A, and T.R. Miller was No. 7 in Class 3A.