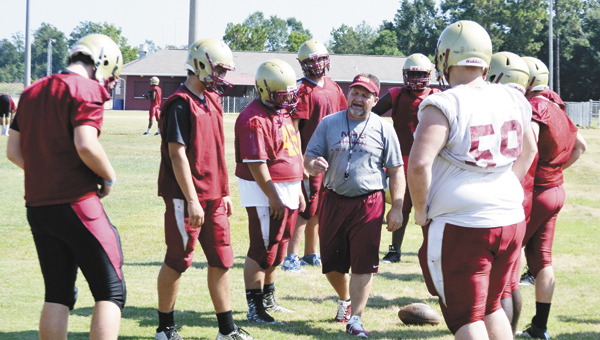 Northview High School football coach Sid Wheatley is proud of the progress that his Chiefs have made at practice so far.
“We’ve been improving a little bit every day,” he said. “It’s a bit overwhelming because we’ve got a game Friday but I feel pretty good. I’m especially happy with our conditioning; I think our kids are in great shape.”
Wheatley’s Chiefs began practicing Mon., Aug. 3, including several days of two-a-day practice before school began. He said it is important to keep the players hydrated and safe in the hot temperatures.
“It’s been extremely hot, but that’s something that everyone is having to deal with this time of year,” he said.
Northview will open its season Friday night with a preseason jamboree game against Booker T. Washington. The Chiefs will again compete in Class 1A, District 4, but there are only two teams who are district opponents this year — Jay and Baker. Freeport, who was in the district last year, was moved to District 5.
The Chiefs have filled out their schedule with many tough games, including home matchups against Mississippi school Vancleave and Alabama powerhouse Maplesville. Maplesville was undefeated in 2014 and won the Class 1A state championship in Alabama.
“It’s a tough schedule and there’s no easy games,” Wheatley said. “We’re going to have to be prepared every night we play.”
Wheatley said he hopes that people who watch Northview play will be impressed by their effort and tenacity.
“I want people to say that we play with 100 percent intensity and desire,” he said. “I hope that they say we played with great passion.”