Atmore couple gets engaged at game 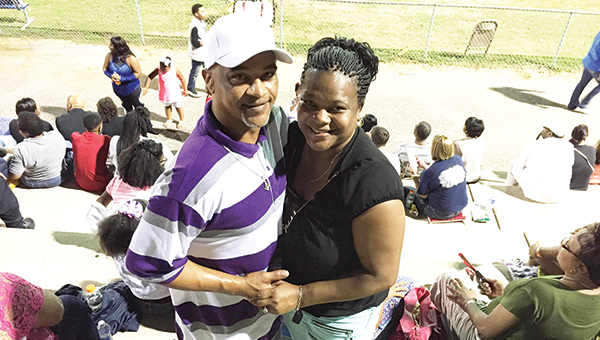 Linda Richardson couldn’t believe what she was seeing right before the third quarter of the Escambia County football game last week.

Richardson’s daughter, Gamaria, was holding a sign made by her boyfriend, Mike Wiggins, that said “Linda, will you marry me?”

“I’m still shaking,” Richardson said after she gave her answer.

When asked if she was surprised, Richardson said she was.

Wiggins said asking for Richardson’s hand in marriage has been a long time coming.

“I just got the voice to ask her,” he said. “I was a little nervous. I didn’t know how it was going to go.”

Wiggins said he asked Gamaria to participate in the engagement.

“She said halftime would be a great time,” he said. “She had a poster with a sign right at the field.”

Wiggins said he feels great that he got the question out and that he’ll soon marry Richardson.

Both are originally from Atmore, but live in Columbus, Ga.

Escambia County’s board of education is one of 51 school boards in the state that will soon receive the 10th... read more