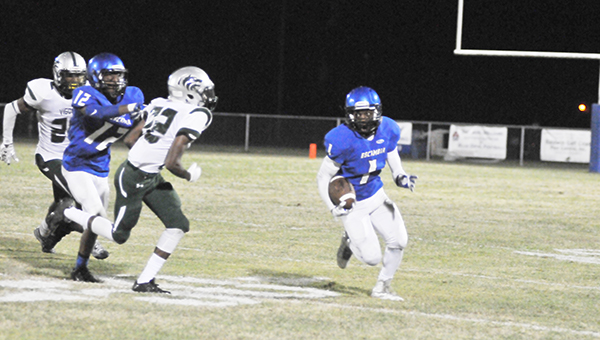 Escambia County put together a good defensive effort in the first half, but Vigor was too much as the Wolves rolled to a 43-0 region victory tonight.

The Blue Devils trailed 16-0 at the break, but it easily should’ve been 9-0, ECHS head football coach Royce Young said.

“We did play well defensively in the first half,” Young said when asked if there were any positives from the game. “It still was just a two-score game.”

When it got going, Vigor’s passing attack proved deadly for ECHS.

The Wolves tacked on a last-minute touchdown before halftime when senior quarterback Tyree Taylor threw a pass to Fred Adams, who stepped in the way to catch the throw. Adams then took the ball 56 yards for the score with 46.6 seconds left in the second quarter.

“The last touchdown you saw we had two players not in the backfield,” Young said. “Against Vigor, even two scores down isn’t a big deficit at halftime.”

The game was scoreless through the first quarter as it took a while for both teams to get going.

Taylor, who was responsible for four touchdowns, scampered in from 10 yards for his first of two rushing touchdowns with 8:26 left in the second quarter.

Taylor scored his second rushing TD from 14 yards and with 7:33 left in the third quarter. With 5:01 left in the third, Taylor connected with senior wide receiver Brandon Rodgers for a 46-yard strike to go ahead 29-0.

One thing that didn’t help the Blue Devils was turnovers. For the game, ECHS coughed up four balls for the Wolves.

“Turnovers will get you beat against an average team,” Young said. “You can’t turn the ball over and have a lot of penalties against a good team. We have to correct the things that are correctable. Penalties and taking care of the football are obviously correctable.”

Vigor senior running back Joshua Lacey ran in a 8-yarder with 4:16 left in the third, and sophomore fullback Tadarian Dale punched it in from 35 yards with 54.8 seconds left in the fourth for the Wolves’ final two scores of the game.

VHS drew first blood way back in the first quarter when ECHS quarterback Rashaun Flavors was sacked in the end zone for a Wolves safety.

The Blue Devils will hit the road for a four-game stretch at B.C. Rain next week, Jackson on Sept. 18, T.R. Miller on Sept. 25 and Faith Academy on Oct. 2.

Young said the next four games will be depending on who shows up to work Monday morning.

“I told them that we need to look in the mirror, and that Monday is a holiday,” he said. “So, do we want to get up and come to work Monday for B.C. Rain, or do we want to take the day off? We’ll find out who shows up Monday ready to work.”

By David Rainer Alabama Marine Resources Director Chris Blankenship has a point to make, but the audience he needs to... read more