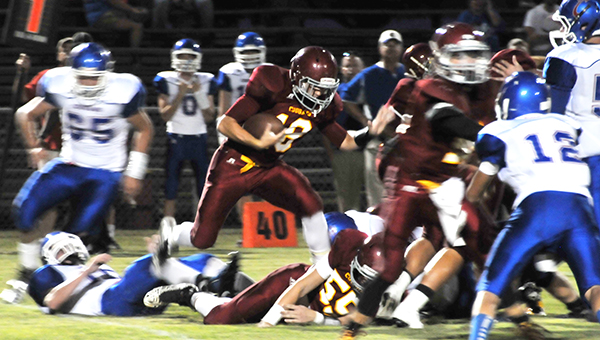 The Cougars shot out to a 14-0 lead midway through the first quarter and lead 28-0 at halftime.

By the break, EA had the game under control, which enabled the Cougars to put in a lot of younger players for the second half.

Coming into the game, a big question mark was how would EA’s line of scrimmage fair.

EA held its own against Crenshaw Christian’s big boys, especially on the offensive front.

“We were so big-play oriented in that game,” EA head football coach Hugh Fountain said. “I don’t think (junior running back) Kris (Brown) hit the ground. I don’t think he ever got tackled.

“They didn’t tackle our backs too well,” he said. “That was good for us.”

Brown scored the game’s second touchdown of the night with 3:28 left in the first quarter on a 62-yard scamper. He could’ve had two additional scores, but the 80-yard runs were called back because of penalties.

Trey Turner helped the Cougars draw first blood in the opening period with a 21-yard scoring rush with 9:01 on the clock. Turner’s TD was set up when CCA fumbled the ball on a bad snap, to which Drew Koons made the recovery. With the unsuccessful PAT, EA lead 6-0.

Gumapac put the game away for good with 7:39 left in the second quarter on a 1-yard TD rush that gave the Cougars a 21-0 advantage. He added another score, this time from 22 yards out, with not 5 minutes later for a 28-0 lead after a successful PAT.

With such a high-scoring game like Fountain said, the Cougars were allowed to play a lot of their younger players. In fact, EA played four quarterbacks in the game — Gumapac, Brown, Flavors and Jabe Dawe.

To start the second half, Patrick McGee ran the length of the field 85 yards with 11:02 left in the third to allow the Cougars to go up 35-0.

CCA scored twice in the fourth quarter, once at the start and the second time coming with a little more than a minute remaining.

For the next four weeks, EA will be hitting the region schedule hard as the Cougars play Hooper Academy, Monroe Academy, Morgan Academy and Pike Liberal.

Fountain said tonight’s game was a good tune up for the next four weeks.

“All of these region games are of big importance to us,” he said. “We’ve got on a little winning streak, and we need to maintain it. We’ve got to get better executing.

“Every Friday night we play, the key thing is to try and get better,” he said.

Northview, Atmore fall on the road