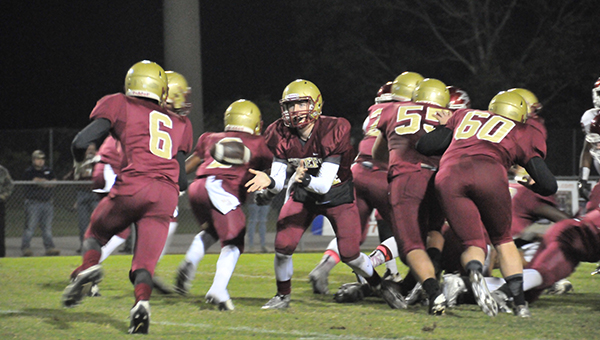 Northview beat itself in a 32-0 regular season loss to Alabama’s Maplesville earlier tonight at home.

The Chiefs had four turnovers and missed some tackles on defense in the loss to the second-ranked Red Devils.

“Nobody likes to lose, but when you beat yourselves, you’re not giving yourself a chance,” NHS head football coach Sid Wheatley said. “In my opinion, we beat ourselves tonight.”

It didn’t start out well for the Chiefs as the Red Devils scored on their first possession of the game.

Maplesville’s Cole Spencer found Robert Girlie for a 26-yard strike on a fourth-and-10 play with 8:09 left in the first quarter. After the Chiefs coughed up their first turnover — an interception from quarterback Gavin Grant under pressure — the Red Devils tacked on another score after Corey Hall ran it the ball in from 11 yards out.

“It’s 7-0 and we had six guys around a runner on third-and-14, and the guy should’ve been on the ground,” Wheatley said about Dunlap. “We should’ve had the ball. That game should’ve been 7-7 at halftime. It could’ve been 14-7 at the end of the fourth quarter.”

NHS stepped it up on defense as it held MHS on its first possession of the second half.

However, the Red Devils scored a short time later on a 69-yard scamper from Spencer right up the gut with 29.9 seconds left in the third. The score made it 19-0 with the failed 2-point try.

Northview fumbled the ball on its next possession, to which the Red Devils took advantage when Hall scooted in from 2 yards with 9:07 left in the game.

Two turnovers later by the Chiefs, the Red Devils punched in their final TD of the night from the 1.

Wheatley said it isn’t the end of the world as the Chiefs still have Jay and Baker to play in Class 1A, Region 4 action. NHS needs to win these next two region games to get a berth in the playoffs. Earlier tonight, Jay lost to Baker, 48-26.

NHS is back in action next week at home against Liberty County for homecoming.