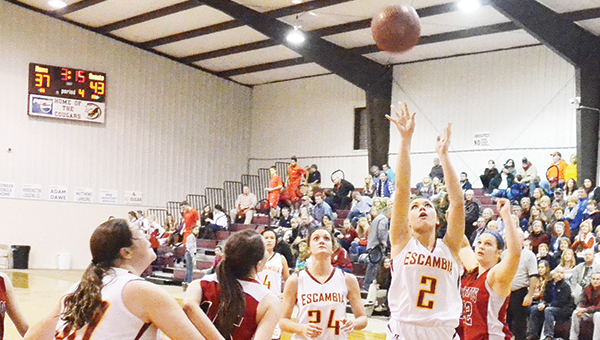 Escambia Academy’s varsity boys and girls basketball teams are looking for another successful season as both kicked off their respective campaigns this week.

The Cougars finished in the AISA Class 3A Elite 8 Tournament last year, while the girls ended a double-digit win season at regionals.

EA basketball coach Hugh Fountain, who is the school’s head football coach, said it’s early to gauge what type of team the boys will put on the court.

“It’s really hard to tell at this time what the boys will be like this season because No. 1, I’ve never coached them,” Fountain said. “I’ve been to games, but I don’t know what we’re up against versus what everybody has.”

Fountain added that he’s going to learn a lot about the team this week and in the weeks leading up to Christmas.

Fountain, who coached basketball once before at W.S. Neal a long while ago, said he entered this season with an open mind.

“A lot of these kids played football for me,” he said. “We’ve been practicing for the last two weeks, and I’ve been proud of the effort I’ve been getting out of them.

“There are going to be things early season that I’ll be learning about them,” he said. “I’ve been pleased with the senior leadership and effort of our guys at practice.”

Fountain said he’ll be using a motion offense, and a mix on defense, utilizing the team’s speed.

“We’ll try to figure out what works best for us,” he said. “We’ve got one group of guys who can play man (man to man defense) because they got a lot of speed. One thing we’re trying to come up with is where are the best areas to shoot the ball. I want them to not be afraid to shoot, but shoot from areas where they can shoot the ball.”

For the girls, EA coach Cale Thompson said he’s excited to get the season going.

The bulk of the Lady Cougars’ top five are coming back this year.

Leading the way is Mikayla Spruill, the team’s only senior.

Thompson enters his third season as the girls’ coach at EA.

He said his offense will be based around what the other team’s defense shows, and the defense is going to be a mix of man to man and zone.

“We really want to run the court, push it up and down the court,” Thompson said about his offense. “We want to rely on our speed.”

Thompson said it’s comforting to know that you are bringing back most of the players that put in quality playing time last season.

“It’s always nice when you’re not losing players,” he said. “We did have a large senior class last year. However, we had a lot of younger kids that contributed to the team. It does feel good when you get players back for next year, and for another year or two.”