Cougars’ offense comes through in 79-71 win over CCA 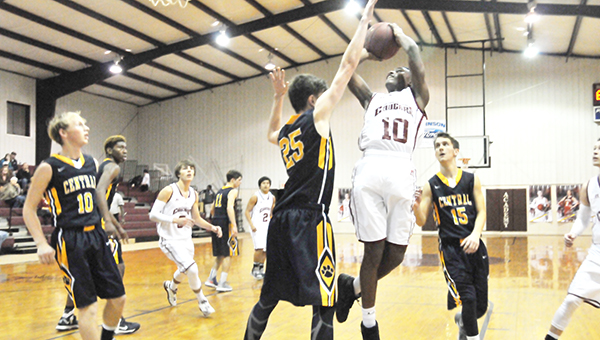 Three offensive sequences, pressing of defense and making clutch shots down the stretch were the difference tonight for Escambia Academy as the Cougars topped Central Christian Academy 79-71 to keep their home streak undefeated.

EA coach Hugh Fountain said the offense was birthed from a pressing defense.

“We were getting good hustle from the boys,” Fountain said. “I was proud of them. We’ve been scoring a lot of points on teams.”

Trailing 17-6 in the first, Blake Allen drove the lane to cut it to 7, and Fred Flavors managed a put back to keep the Saints honest. Kainoa Gumapac laced a nice pass to Bradley Geck to make it a 6-point game, and added another to trail 20-16 at the end of the first period.

One of the biggest differences in the win was controlling CCA big man Zion Bethel. He had his way with the Cougars in the first period, but not in the second as EA held him to no points.

Geck gave EA its first lead of the game with a rebound and put back early in the second, and Tyler Sells added a 3-pointer to give the Cougars a 26-24 advantage.

With Bethel out, the Cougars forgot about CCA’s potent 3-point shooters in Andrew Burger and David Enlinger. Both hit shots from the perimeter to go up 32-26 just like that.

However, HT Fountain came off the bench and hit his second 3-pointer of the period to tie it at 32-all with 2 minutes remaining in the first half.

Christian Goodwin then nailed two 3-pointers before EA went on its short 5-0 run off of a 3-point play by Sells, who then found Allen a little later in the paint for an easy bucket.

“We knew that team was going to run,” the coach said. “We knew they were going to try to pump it in to the big man (Bethel). He scored nine points in the first quarter, and then six the rest of the game.”

Late in the third period, Flavors started the run on a drive to the basket to tie it at 56-56, and Sells hit his second 3-pointer of the period to propel the Cougars to go on a 7-0 run as they led 63-56 going into the fourth.

While the Cougars’ defense did a good job of keep the press on the Saints, CCA — as Fountain said — used its speed when it needed to in the fourth to close a 9-point EA advantage.

Sells hit another 3-pointer for a 70-61 lead, but Bethel answered with a put back, and after a couple of turnovers on the Cougars’ end, Enlinger drained a trey to tie it at 70.

EA’s Gary Campbell got a rebound and put back, Allen hit a two free throws and a 3-pointer to ice the game.

“We really wanted to stay undefeated at home,” Fountain said. “We haven’t lost a game at home now. We’re 6-3 at the break.

“I think with the way we’re playing, it can grow into an exciting brand of basketball,” he said. “Tonight, we were hustling. We’ve been teaching it in practice. If you’re going to win, you’ve got to learn to play aggressive.”

Allen led EA with 18 points. Sells chipped in 17 and Geck had 12. EA big man Trae Lee, who made his presence felt throughout, scored a dime, and Flavors had eight points.

Goodwin led CCA with 33 points. Bethel had 15, and Enlinger scored 11.

In varsity girls action, the Lady Cougars’ undefeated season came to an end with a 59-27 loss to an experienced Lady Saints team.

“We definitely didn’t play to our potential tonight, but at the same time, we played an extremely high caliber opponent. The caliber opponent we saw tonight is probably the best we’ll see all year,” he said.

EA trailed 32-18 at halftime, and was still in it coming into the third period.

Thompson said he emphasized to the girls to buckle up on defense to start the second half.

The Cougars will be back in action on Jan. 2, 2016, in a Christmas-New Year’s tournament at Morgan Academy.