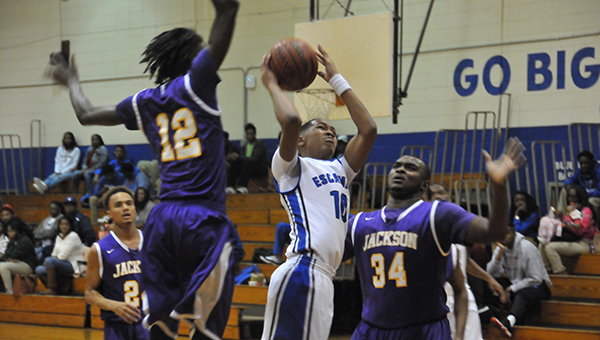 Escambia County never seemed rattled near the end of tonight’s area contest against Jackson at home.

The Blue Devils kept their composure and slowed the game down late to take a 63-59 win to start Class 5A, Area 2 play.

By the end of the third period, the Blue Devils found themselves in a small, 3-point hole at 41-38. However, a couple of 3-pointers, playing man-to-man defense and attacking the basket garnered a 23-point fourth period, which proved to be the difference.

“We were behind and we came together, and I tell you what, last year, the guy making the schedule had a big break in between the holidays so we didn’t play in the holidays,” ECHS coach Bruce Craig said.

The Blue Devils haven’t played a game since the Cornell Torrence Tournament, which ended on Sat., Dec. 12.

Craig said most of the players went off on vacation during the holidays and didn’t get to start in the game. In fact, some of the younger guys got to get in some quality time.

In the end, Craig said the team was blessed to get the win.

To make things worse for ECHS was Jackson’s Daron McMullen, whom the Blue Devils didn’t have an answer for under the rim.

McMullen had his way in the paint and got things going in the fourth period to give JHS a 43-38 lead.

Triston Knott answered with a 3-pointer to cut the lead to 44-41, and Devon Robinson drove the lane after getting a turnover to inch the game to within one in a short, but good series for ECHS (10-3, 1-0).

Robinson got an old-fashioned 3-point play a little later to give ECHS a 52-50 advantage.

Anthony Fountain drained a 3-pointer, Knott and Lue Williams banked in a pair of free shots each for a 59-54 ECHS lead.

McMullen kept the Aggies in it with a good up and in with less than 2 minutes left, and his teammate Davion Fall got in a 3-pointer to cut it to 61-59.

Fountain found Robinson on transition to seal the deal for ECHS after a timeout by JHS.

Fall got the ball rolling for JHS in the third with back-to-back 3-pointers and his team took its first lead of the game after a nice pass to McMullen under the rim for a layup.

Eric Williams then found an open Chille Ford in the paint for two, and Malik Brown added a drive in the lane for a 38-35 lead.

During the second period, Williams distributed the ball well and even got in a stellar spin move for an easy bucket. Williams found Robinson a little later for a 25-19 lead that turned into a 30-22 lead at the break.

Because players missed practice time during the holidays, Craig started his younger players, who kept up with JHS in the first period.

ECHS climbed back from a 6-0 deficit to tie it at 8-8 after a drive to the basket from Brown, a 3-pointer from Nicholas Davison and a put back from Thomas Knight. The game was tied at 15-all after the first period.

Fountain led ECHS with 12 points. Robinson chipped in 11. Knott and Ford had eight apiece, and Williams had seven.

ECHS is back in action on Friday at home against W.S. Neal.

View photos from the game here.

Escambia Academy’s Fred Flavors goes up for a shot under the rim in an earlier contest. | Andrew Garner/Atmore Advance... read more