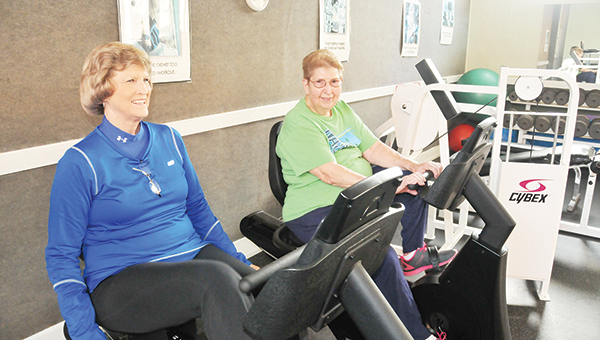 Linda Miller and Billie Wilson smile as they work out on the bikes at the fitness center. | Andrew Garner/Atmore Advance

It’s the same song and dance every year for Maria Love Davis.

Davis is the fitness director at the Atmore Area YMCA, and she said a lot of people come into the fitness center in January because they can’t fit into their clothes anymore.

“That’ll last for a few weeks or a month,” Davis said. “Some stay longer and they’re in and out.”

Davis said exercising and getting in shape is a lifestyle.

With the new year, the YMCA will see a rise in memberships, CEO Paul Chason said.

Chason said the organization is running a membership deal during the month of January.

“For the first 50 new or returning members, that’s a $40 savings,” he said. “We will see membership increase during January.”

Chason said the number of people who sign up fluctuates.

“We’re an economy-driven organization,” he said. “If people feel like they have money to spare, we’re an option.”

Last year, Chason said the YMCA had about 20 new members during the month of January.

“That’s a big resolution time, where people come in and work out,” he said.

There are different types of memberships, including student, single parent, family member or senior citizen memberships. Each membership category has different costs associated.

The fitness portion of the YMCA is its bread and butter, Chason said.

The fitness center is open from 5:30 a.m. until 8 p.m. Monday through Friday, and on Saturday from 7 a.m. until noon.

Chason said he encourages those coming to work out to arrive 30 minutes before close to ensure a good workout.

1. Band Perry in Atmore — Popular country-music and pop band The Band Perry visited Atmore in September for a... read more