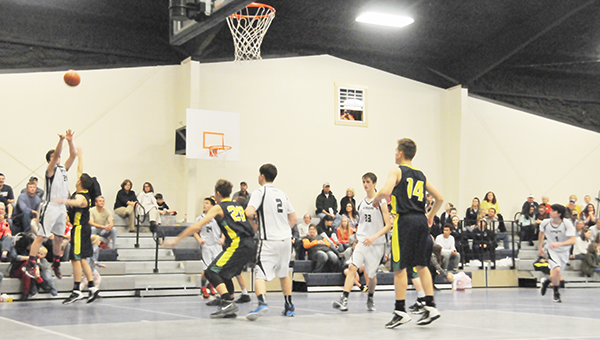 Atmore Christian’s Ethan Heller (21) tries a 3-pointer late in the second half of the Rams’ 73-50 win over Bayshore earlier tonight. The Rams outscored the Eagles 24-9 in the second period to pull away for good. | Andrew Garner/Atmore Advance

Atmore Christian outscored Bayshore 24-9 in the second period en route to a 73-50 victory earlier this evening.

The Rams (5-5, 4-1 in the Panhandle Christian Conference) used an up-tempo and full-court attack in the deciding period to pull away for good at 35-22 at the break.

ACS trailed 13-11 after the first period, but quickly got on fire as Ethan Heller got the ball rolling on a nice drive through the lane. Heller added a steal and a drive to the bucket to give his team a 15-13 advantage.

From there, the Rams — aided by Charlie Gandy, Kevin Depew and Heller — took over on a 6-0 run within the first 3 minutes.

Gandy got a rebound and putback, Depew drained a 3-pointer and Heller got a jumper with 5:28 left in the half for a 21-17 lead.

Gandy added a 3-pointer a little later, and drove the lane to help give ACS the 11-point lead at halftime.

One of the big differences in the second period was the Rams’ use of the half-court trap, which created several turnovers. The Eagles were quick on the offensive end, but were shutdown in the paint.

The Rams put up another good defensive period and led 56-33 going into the fourth.