An Atmore man has been charged with attempted murder, according to the Escambia County Sheriff’s Office. 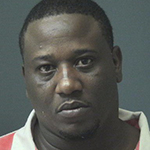 According to the ECSO, deputies responded in reference to an assault victim on Dec. 29, 2015, where a victim said someone had tried to kill him in the area of Brazzell Hill Road.

Upon the investigation, a warrant was issued for Montgomery’s arrest after the victim named Montgomery as the suspect.

Investigators are currently looking for a 2007 or 2008 Chevrolet Truck, silver or pewter in color, according to the ECSO.

The vehicle was driven by Montgomery during the crime.

MCDAVID — A line trickled outside of the State Line Lottery shop’s door, where many were waiting to buy tickets... read more