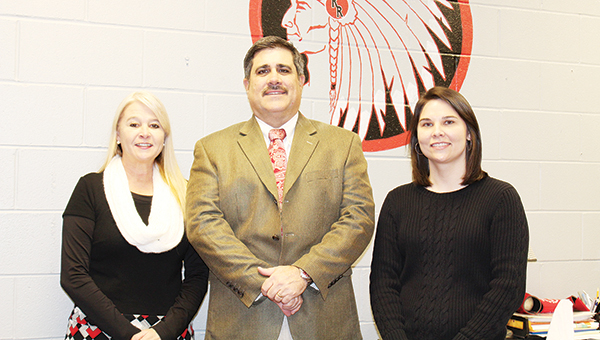 Perdido Elementary and Middle School recently announced their 2016 Teacher of the Year for both elementary and middle school.

Jeanne Shiver was selected as the “Middle School Teacher of the Year.” Shiver grew up in north Baldwin County, attending both Bay MInette and Perdido Elementary Schools. With the exception of her eighth grade year, which was spent at Summerdale Middle, Shiver attended Perdido Middle School through the ninth grade.

Her high school years were spent at Baldwin County High School. Shiver went to Faulkner State Community College, and received her bachelor’s degree at the University of Mobile.

Shiver began her teaching career at the Crisis Center in Robertsdale.

She said she was then blessed with a job at her alma mater, Perdido Middle School. “Perdido Middle feels like home to me,” Shiver said. “I grew up in the community and love telling old stories of our little school to my students. I am so fortunate to be entering my 18th year of teaching and pray that I will have many more.”

The Elementary Teacher of the Year is Paige Coleman.

Coleman attended Perdido School from kindergarten through eighth grade, and said she is thrilled to be teaching here now.

After completing eighth grade at Perdido, she attended and graduated from Baldwin County High School and then studied at FSCC.

She finished college and received her bachelor’s degree in elementary education from the University of South Alabama.

Coleman is in her 10th year of teaching and has taught grades third, fourth and fifth, and is currently teaching fourth grade.

After two intensive years of technology training, she received certification as an eMints instructor.

“I consider myself lucky to be back at the school where I grew up,” Coleman said. “There is nowhere else I would rather be, and I look forward to my son attending Perdido School one day also.”