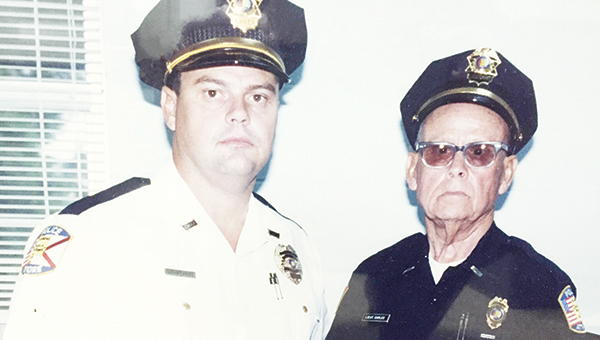 Glenn Carlee (left) is shown here as the Atmore police chief with his father, Joe, who served as an auxiliary policeman. | Submitted photo

Carlee retires after 41 years with city

When Glenn Carlee went to work for the Atmore Police Department, he wasn’t exactly old enough to get the job, which was supposed to last long enough to save a little money for college.

“I started here in 1974 as a dispatcher,” Carlee said in a recent interview, adding that he had worked the two previous summers as a lifeguard.

He was a month shy of his 16th birthday.

“McArthur Davis hired me,” he said. “He had worked two of my brothers before me. One graduated and went to college, then he hired the other one, and he graduated.

The long-term plan was that Carlee would go to college and law school, and practice with his older brother, Robert. But a funny thing happened.

“I got hooked and stayed here,” he said.

He remembers almost every detail of the first call he dispatched.

“It was the first day I trained,” he said. “Gene Wright was dispatcher then. I’d been here about two and a half hours, and he left to go to lunch.”

The young dispatcher had been around, both because his dad worked as an auxiliary policeman and with his older brothers.

“He no longer got in his car, than there was an industrial accident at Masland Carpet,” Carlee recalled. “Someone had his hand caught up in a piece of equipment. It was chaos.”

He worked nights dispatching his senior year of high school.

“I thrived on it,” he said. “The busier it was, the more I liked it. It wasn’t like now with 10 phone lines coming in; but it was exciting for a 15-year-old.

“Now, I can’t multitask at all,” he laughed.

When he graduated high school, Bill Smith was police chief in Atmore and Louise Day did double duty as city clerk and court clerk. Oris Davis was mayor. In those simpler days, warrants were issued out of dispatch.

“If it was one in the morning or three in the afternoon when we needed a warrant, I just signed Mayor Davis’s name,” he said.

“Between ages 18 and 21, I dispatched if we were short, did the court clerk work, collected fines, and organized the court system,” he said. “Along with that, then he put me riding with my mentor, O’Neal Black. Larry Gibbs was the investigator.”

Carlee graduated from the Police Academy in 1980, and investigation became his niche.

“I got put on the patrol shift under Capt. Bud Sheehan,” Carlee said. “It was an elite group that got selected to work on his shift. It was an honor. “They explained to you it was straight nights, but if you got chosen for a shift, you did it.”

“Eddie Staff Jr. rode by the house one day when I was cutting grass,” he said.

During his career in law enforcement, Carlee said many memorable cases happened during Christmas.

While in Florida, he received a call to do a welfare check on a house Christmas Eve night.

“I found a 2-or 3-year-old toddler in a crib,” he said. “The parents had left to play a musical event, and they were sedating the child with something to make it sleep all night.”

His own son was a toddler then, and it still bothers him that he couldn’t bring the child across state lines to take care of it that night.

“We were able to get the child a place with family members, and we took gifts the next morning, so the child could have Christmas.”

Another memorable case that really stands out is a one in which two elderly women were sexually assaulted. One was murdered; the other was taken from residence, sexually assaulted, shot and left for dead in field.

“It was cold,” Carlee recalled. “She had to have been in her 80s. She crawled out of that cotton field at daylight and got help.

“She not only survived, but survived long enough to testify against him,” he said.

The man was convicted of capital murder.

Staff was a member of the city council, and explained that the council was interested in Carlee becoming James Dixon’s assistant chief.

“The plan was he would be here 10 more years, and groom me for the job,” he said.

“Howard was at my house offering me the job before I knew James had quit,” Carlee said.

“I told him I was too young, and they needed to get somebody with more experience,” Carlee said. “They had one application. So I took it on an acting basis until they could find somebody. I was the youngest chief in the state at the time, and I was scared to death.”

He took the helm of a department that had six patrol cars – including four spares. Carlee convinced the new mayor to implement a take-home car program, making the vehicles last longer and increasing the department’s visibility.

Then he tackled equipment. When he joined the department, the city furnished uniforms, but officers purchased their own weapons and other equipment.

He began working with officers on undercover drug investigations.

“We arrested 89 or 90 when we did our drug round-up,” he said. “We had never done it before. The whole front lawn was covered with parents. We had 188 indictments on 90-something people.

“I thought, ‘Well, we’ve cured the drug problem, let’s move on to something else.’ ”

That something else was a DARE program, which put officers in the schools with an anti-drug message.

“I thought with all the ones in jail, if we could prevent the kids from using, we’ll be done.

“It didn’t quite work that way,” he said.

Crack cocaine had just come on the scene. The department used cameras and undercover agents to fight that problem.

Now, the drug on the streets is Meth or ICE.

“Other than prescriptions, that’s mostly what we see,” he said.

But police work is totally different, he said.

“People’s attitudes and lack of respect is the thing that has changed the most,” he said. “Young people want gratification right off the bat.”

After serving as chief from ’89 until 1997, Carlee moved to the Drug Task Force for five years. He went back to the city hall complex as director of public safety in 2002.

These days, he does his part to combat the drug problem by working with the Escambia County Drug Court.

“I feel like we do some good there,” he said. “I like seeing the transition in people, and Judge (Brad) Byrne runs a good program.”

“It’s something we do together,” he said.

He’s had several offers of other jobs in law enforcement, but says he’s going to try his hand at retirement first.

Linda Miller and Billie Wilson smile as they work out on the bikes at the fitness center. | Andrew Garner/Atmore... read more