Brown fueled by banquet for next year 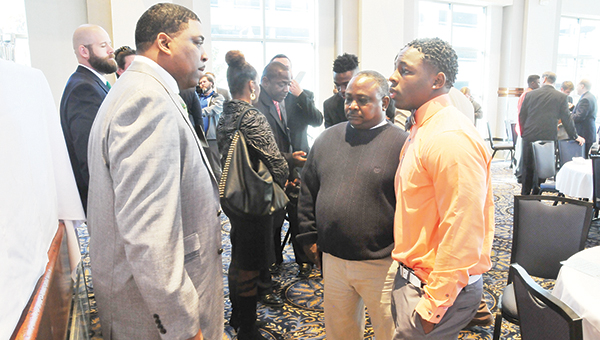 When Escambia Academy stand out running Kris Brown got back home last week from the 2015 Alabama Sports Writers Association Mr. Football Awards Banquet, he went straight to the weight room.

Brown was a finalist for the AISA Back of the Year, but didn’t get the prize as Edgewood quarterback Nathan Rourke held the plaque instead.

Despite not getting the award, Brown said he enjoyed the experience.

“I really enjoyed the experience of being down here (in Montgomery),” he said. “It was a great opportunity to be down here with all of the other people that are good in the state, and with the best in the AISA.”

Brown finished with 1,569 yards on 141 carries and scored 26 touchdowns for the Cougars during his junior season.

The experience at the banquet only inspired him to do better next year, Brown said.

“Me not winning, I’m disappointed, but it’s going to make my time away from the game harder in getting ready for next year,” he said. “I am going to provide for my team, and be a leader to my team.”

Brown said he’s already started thinking about next year, and exactly what he’s got to do to be in this position again.

In the end, life will go on, he said.

Trey Carter of Monroe Academy won the AISA Lineman of the Year award.

The following are the back and linemen of the year award winners for 2015 in the Alabama High School Athletic Association:

• Terence Dunlap, Maplesville, back of the year

• Chadarius Townsend, Tanner, back of the year

• Taylor Hayes, Piedmont, back of the year

• Kaleb Barker, Priceville, back of the year

• Jordan Bentley, Guntersville, back of the year

• Tyler Johnston, Spanish Fort, back of the year and Mr. Football for 2015

• La’Mical Perine, Theodore, back of the year

Cabins at Meaher offer a lot

By David Rainer If you’ve ever watched a show on HGTV called “Tiny House Hunters,” then you have an idea... read more