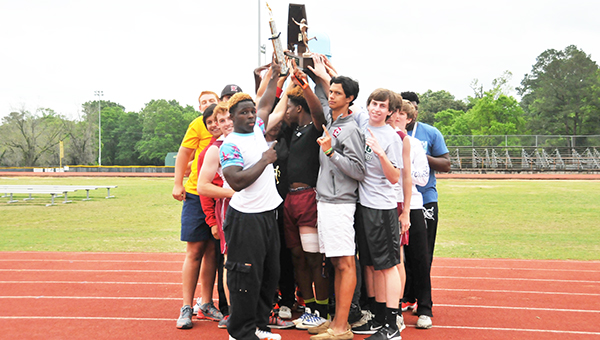 EA junior Kris Brown beat two state records — one his own — in the 100-meter dash, running a finals time of 10.72 seconds. During the preliminaries on Wednesday, Brown beat a 29-year-old record in the event with a time of 10.76 seconds.

Brown, who was named the male Most Valuable Player at the meet, said everything was clicking, including the weather, which threatened rain all day.

“Today, I as blessed that we had good weather,” Brown said. “It really didn’t mess up what we did in our running. The wind was blowing in our favor. The track stayed dry.”

The boys also broke a state record in the 4×100 meter relay, finishing the event in 44.92 seconds.

“I was proud of the boys for winning,” EA track coach Hugh Fountain said. “They came up here and did what we were expecting them to do. We’ve been pretty strong here in track.

“You want them to be able to perform at the best level at the state meet,” he said. “We broke a state record in the 4×100 and 100-meter dash. We’re proud to get those records, and really, I thought everybody performed well.”

Fountain said what he loved the most about the team is that everybody competed against each other.

Fountain said the team peaked at the right time.

“They seemed to find their mojo at the right time,” he said. “The weather was good to us. We were able to fight through the weather issues. I thought they worked real hard for us.”

Fountain said things started turning around during spring break, when the Cougars went to Jay, Fla., for a meet.

“We didn’t have everybody,” Fountain said. “We were very competitive against teams we haven’t ran against before. I was beginning to get a sense that we probably have a really special team if we continue on the path we’re on.”

See complete coverage of today’s meet in Wednesday’s edition of the Atmore Advance.