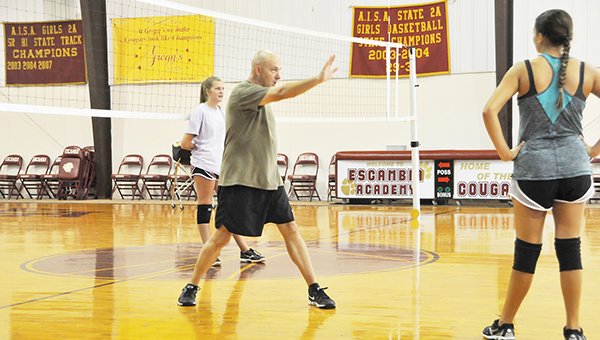 The new volleyball coach at Escambia Academy played and coached the sport while in the U.S. Army, and has brought his knowledge of the game to the Canoe school. Livingston has been on staff at EA for a few years. His wife, Tyra, is an elementary teacher at the school.

Livingston served in the Army for some 20 years. He retired because of an injury to his shoulder.

For most of his career, Livingston taught in the military on a wide range of subjects. At present, he is the Spanish teacher at EA.

Livingston said volleyball is a sport that he’s always wanted to coach.

“I played two-man volleyball in Okinawa, Japan,” he said. “I played on the American League there. On (Army) posts, the champions of the post league would then go down and play in the Okinawan League.

“They take it very seriously,” he said. “They’re serious about volleyball.”

Livingston said he played volleyball for four years, and coached his last year there.

Livingston said the principles of the game are the same, but the positions are different.

“The fundamentals are the same,” he said. “A foot serve is a foot serve. A spike is a spike.

“The only thing I would say is different is that you have two people on the court,” he said. “Often times, the girls lose coordination (with six).”

The 2016 edition of the Lady Cougars’ volleyball squad will feature three seniors, three juniors, seven sophomores and one freshman.

Livingston said the girls have progressed a lot at practice.

“They’ve come a long ways since we started practicing,” he said. “I think that we’ve got a lot of talent on the team, but it’s just undeveloped.”

The Lady Cougars will open their season tomorrow afternoon in a home contest against Clarke Prep. Junior varsity first serves at 4 p.m.