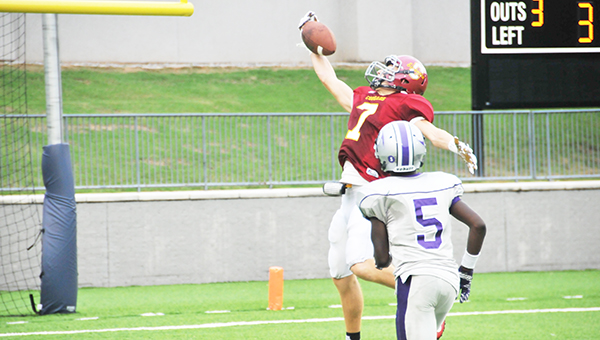 Lee and Turner combined for four touchdowns to help lead Escambia Academy to a 35-12 victory tonight over First Baptist School of Charleston, S.C. in the SECIS Kickoff Classic at the Cramton Bowl in Montgomery.

Lee, a senior defensive end, caught two interceptions and ran one back 70 yards for a touchdown to give the Cougars a healthy 27-6 lead in the first half; and Turner, a junior running back, scored on runs of 6, 4 and 47 yards in the game, which was make up for a lost fumble early in the opening 12.

Lee made his first interception catch on First Baptist’s first possession. He said it came as a surprise. The second didn’t come as much of a surprise.

“The first one I was kind of surprised that I caught it,” Lee said. “The second one, I saw it coming to me.

Even though the Hurricanes of S.C. drew first blood, the Cougars didn’t let that deter them as Turner scored his first touchdown of the night with 5:03 left in the first.

FBS got on board on a 17-yard pass from quarterback Cameron Berl to Xavion Washington. Late in the fourth, Berl connected with Dukes for a 15-yarder.

The Hurricanes, a predominantly passing team, played to their strength, but it got them nowhere as EA’s defense stifled any attack in the air.

To start the second quarter and with a 7-6 lead, EA senior quarterback Kainoa Gumapac connected with senior receiver Gary Campbell on a 46-yard one-handed catch to help give the Cougars a 13-6 advantage.

“I don’t know how many times they threw the ball, but they threw it enough to make it a game,” Fountain said. “It was almost 7:30 at halftime.

“This week had been a tough week (at practice) because of the weather,” he said. “We persevered through. We let them get a slant and then we had a turnover (in the first quarter.) We made too many turnovers tonight.”

Despite the turnovers, Fountain said the boys hit hard.

Turner’s second TD came in the second quarter on a 4-yard rush deep into Hurricane territory for a 21-6 lead with the 2-point conversion from Gumapac to receiver Fred Flavors.

On the Cougars’ next offensive series, Gumapac threw a bomb to Patrick McGhee for 53 yards, but no score came as a result.

Lee made his pick six on the Hurricanes’ next offensive series with 2:58 left in the opening half to put the game away for good.

First Baptists’ Michel Dukes was tackled in the end zone for a safety with less than 3 minutes left in the first half.

On the first play of the second half, Turner ran the ball 47 yards to the house.

South Alabama commit Kris Brown was quiet from early in the first half and for the rest of the game.

Fountain said Brown got banged up a bit.