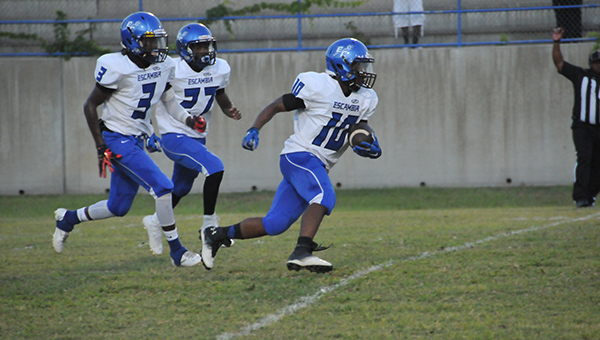 CAMDEN — Down 16-0, Escambia County scored two touchdowns in just over 2 minutes and used that momentum to beat Wilcox Central 24-16 in its season opener Friday night.

The Blue Devils’ defense came up with two fumble recoveries for touchdowns in the first quarter to move to within four of the lead. ECHS went on to take a lead it wouldn’t give up early in the second quarter.

“We still turned it over twice in the passing game,” Young said, adding that throwing it more is key for the Blue Devils. “We’ve got a long way to go in a lot of areas, but we found a way to gut one out (Friday night).”

Showing its openness to throw when it needed to, Wilcox Central got on the board first on a 30-yard dart Jacquari Portis to Japatrick Blackmon just over 4 minutes into the first quarter for a 8-0 with the 2-point extra try.

After recovering a fumble on the Blue Devils’ first offensive series, the Jaguars struck on their first play with a 53-yard touchdown rush from Deanteria Campbell to take a healthy 16-0 lead midway through the first.

While the offense couldn’t get anything going on its next possession, the Blue Devils’ defense found something to munch on in the form of a fumble from Portis, from which Darrien Abrams jumped right on it like white on rice for the score. The 2-point try was no good, but ECHS was on the board at 16-6.

ECHS cut it to four just over 2 minutes later on an backward, incomplete pass from Portis, from which Darius Robinson picked the ball up and ran it back some 25 yards for a touchdown to bring it to 16-12.

Young said he was concerned about his secondary because it consisted of three ninth graders and one tenth grader after four starters were suspended for the game.

However, even though the defense gave up those two easy scores, he said the defense played well.

“Last week, we played the first quarter about like we were stuck in quick sand,” Young said. “A lot of it was nerves. That’s why you play those early season games. It looked like we were doing that once again.

“Once we gave up those two easy scores, the rest of the night the defense played pretty solid,” he said. “We had little let downs, but all in all, I thought the defense did a pretty good job after the first two (touchdowns by WCHS).”

To start the second quarter, Brendan Jenkins scored his first of two TDs on the night on a 7-yard scamper with 11:01 left for a 18-16 lead.

The Blue Devils started the third quarter in desperate need of a touchdown to pull away even more, and it came more than half way through on an 8-yard scoring rush from Jenkins.

Built on the momentum, ECHS recovered an onside kick, but couldn’t get anything going on offense.

The rest of the game saw the Blue Devils swarming the Jaguars’ offensive run game.

To ice the game, Shannon Wheat Jr. caught a leaping interception from Portis with 2:20 left.

This may be a big win to start the season off, but the Blue Devils will have their hands quite full as they host No. 4 UMS-Wright to start Class 4A, Region 1 play next week.

Young said he hopes the fans that showed up last night will be there next week to support the players.

“I know the ones who were here appreciate the effort,” he said. “I think they’ll spread the word that these kids found a way to come from behind to win, and then had to hold them a couple times. It wasn’t an easy win. I just hope people appreciate how hard these kids are playing.”

In other area action, Northview fell 70-0 to Crestview, Fla.