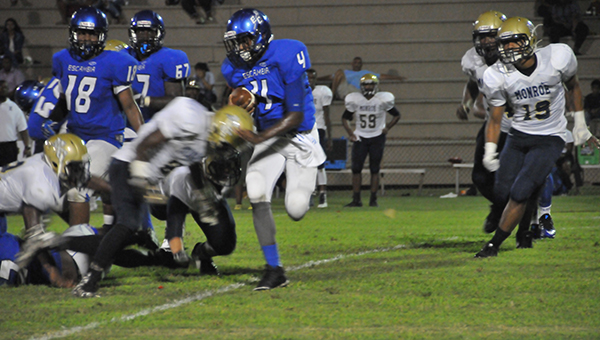 Robinson’s touchdowns came from short yardage plays, all after orchestrating some good drives on the field. His final TD came on a 1-yarder with 2:26 left in the fourth to help push the game into extra time.

Robinson scored on a 2-yard scamper with 11:19 left in the fourth, and from 1-yard out in the second.

The Blue Devils (1-2, 0-1 in Class 4A, Region 1) played a hard-fought game against an opponent who they know well, ECHS head football coach Royce Young said.

“We reminded them about the old saying in our pre-game talk that with all things being equal, there will be two or three plays that will determine the outcome,” Young said. “We out-turnovered them. We dropped two passes late.

“We let them convert on third down,” he said. “It boiled down to who made the most plays. They did.”

The Blue Devils and Tigers traded possessions in the first OT period, but MCHS had some momentum going into the second despite missing a field goal on a fourth down try.

The Tigers gave the ball to No. 11 (name was not available), who then ran it in for a TD from 1-yard out to put up the Monroeville team for good.

ECHS had its chances on the next possession, but a couple incomplete passes iced the game for the good guys.

“I’m proud of their effort, and the heart they showed,” Young said. “They came back two differ times to get it to overtime, and made a couple defensive stands.”

The essential come back for ECHS came with 5:55 left in the fourth quarter.

Robinson connected with Kaytree Russell for 29 yards, and then found Deandre Mitchell for 22 yards in the air to put the ball at the 1-yard line in the game-tying drive.

Robinson took it in the rest of the way, but the extra point was no good on a bad snap.

The Blue Devils tied the game at 18-all after MCHS ran an interception back 70 yards for a score with 6:57 left in the game.

“That’s a step in the right direction,” Young said about the players’ ability to fight back after getting down. “That was a point in time in the past where they hang their heads and quit. They regrouped and recovered.

“We’ve just got to execute better with what we do,” he said. “I guess you can’t just push growth.”

Next week, the Blue Devils take on Andalusia, who lost 14-7 to UMS-Wright Friday.

Northview shot itself in the foot a couple times in a 42-0 loss to Gulf Breeze, Fla., in regular season... read more