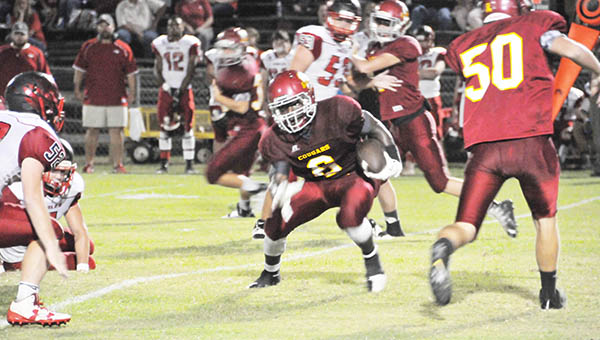 Escambia Academy will be tested this week as the Cougars host Resurrection Catholic, Miss. in a regular-season contest at Bachelor Field.

The Cougars are coming off a 56-19 rout over Jackson Academy, in which running backs Kris Brown and Louie Turner accounted for five of their team’s touchdowns. Turner finished with 171 rushing yard, and Brown had 161.

Resurrection Catholic, like EA, is 4-1 on the season, and from what film indicates, the Eagles are pretty good, Cougars head football coach Hugh Fountain said.

“They’re very methodical,” Fountain said. “They run the ball very well, and they can throw the ball well. They’re balanced.”

Fountain said that the Eagles prefer to run the ball as Patrick Watts, a 233-pound senior running back, is a plugger.

It’s been two weeks since the Cougars’ only loss to Northview, and Fountain said a big emphasis on the team is how it fights through adversity.

“We were disappointed in some of the things we did in the Northview game that hurt us,” he said. “In the fourth quarter, we played a little undisciplined in the game.

During last week’s game against JA, the Cougars faced early adversity by getting behind 7-0. However, Turner helped EA stay in it with three touchdowns in the first quarter to give the Cougars a 21-13 advantage and lead they wouldn’t relinguish.

In the second half of the game, Kainoa Gumapac rushed in from 12 yards, and Flavors added a 67-yard kickoff return for a touchdown in the fourth.

Fountain said the home game, which is the Cougars third this season — comes at a good time in the season.

“Home games are always big and important to us to play here in Canoe,” the coach said. “This is always a good little atmosphere. We‘re glad to have them at home, and glad to have another home game under our belt before we hit the open week during the midseason.”

For the next two weeks, the Northview Chiefs will hit the road for non-region contests at Vancleave, Miss. and Maplesville.... read more