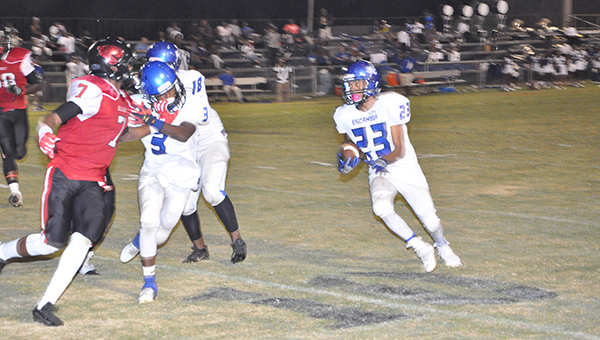 Escambia County played as a team and pulled away with a 34-14 win over Hillcrest-Evergreen to spoil the Jaguars’ homecoming earlier tonight.

The Blue Devils trailed 14-12 at the half, but it was their secondary play that kept them in the contest.

ECHS head football coach Royce Young said he had a few freshman and sophomores step up and make some big plays.

“One of our 10th graders made several catches in double and triple coverage,” he said. “He went up and took the ball away.”

Young said the win was big because HHS went into the contest 2-2, and the Jaguars were bigger and faster.

“We really didn’t match up on paper,” he said. “It was a total team win.”
Next week, the Blue Devils will host Satsuma for homecoming.

Young said he thinks the players understand that they beat a good Jaguars team.

“Maybe this positive will carry over to next week,” he said.