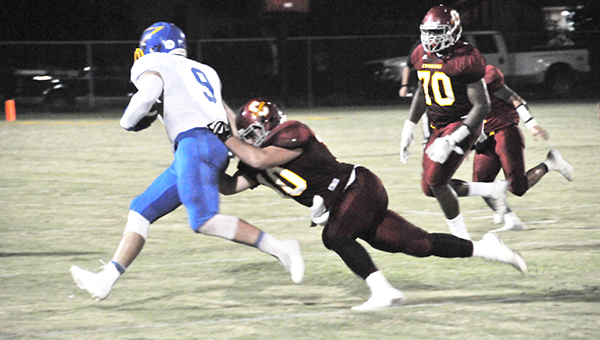 Escambia Academy went for the 2-point conversion to win in overtime, but Resurrection Catholic, Miss. stopped the Cougars at the 1-yard line to win 21-20 at Bachelor Field in Canoe.

With the game tied at 14 apiece, the Eagles scored first in extra time and made the point after touchdown to go ahead 21-14.

After EA’s Kainoa Gumapac advanced the ball 4 yards to the 6, senior running back Kris Brown took it the rest of the way for a touchdown.

The Cougars then took a timeout to discuss the next play.

EA head football coach Hugh Fountain said he debated whether or not to kick it for one or to go for the 2-point try for the win.

Fountain decided for the 2-point conversion, handing the ball off to junior running back Louie Turner.

However, Turner was stopped at the 1, causing an immediate uproar from the home crowd as it thought he crossed the goal line.

“I was proud of them for battling,” Fountain said. “It just didn’t go our way on the 2-point conversion.”

Fountain said during the timeout, everybody wanted to go for the win, and there wasn’t any doubt to hand the ball off to Turner.

“I had no doubt,” he said. “Kris was a little tired. He (Brown) said, ‘give it to Louie.’ I felt like Louie could get in. I have no regrets on that. Either of them, both of them have been proficient all year for us.

“We felt confident in them both,” he said. 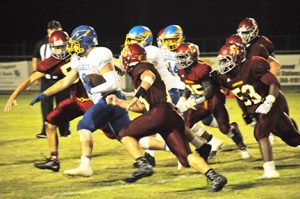 Back in the first quarter, the Eagles (5-1) got the ball rolling on their first offensive possession.

Senior running back Patrick Watts, at 6-foot-2 and 235 pounds, imposed his will on EA’s defensive front as he led a 15-play drive 73 yards for a touchdown with 4:54 left in the opener. The extra point was no good.

On defense, the fourth-ranked Cougars (4-2) looked a little worn after the first offensive series of the game.

Brown managed to score on a 71-yard scamper after running around the left end to help give the Cougars a 7-6 lead not 29 seconds after Watts’ touchdown.

The score stayed that way until the second quarter until Watts ran in from 2 yards away, and with the 2-point conversion, the Eagles led 14-7.

Turner, who also features as a receiver for EA, found the end zone after running a screen pass from Gumapac 81 yards with 5:14 left in the first half. With the PAT, the game was tied at 14-all.

RC battled its way down to the 9-yard line late in the fourth quarter, and took a timeout with 3.6 to go. 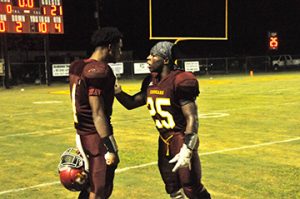 The Eagles tried for a 15-yard field goal, but the ball sailed left, sending the contest into overtime.

Fountain said he was proud of the way his players bowed up in the second half.

When asked to describe the defensive play in the second half, Fountain said the Cougars was more physical.

“That’s high quality competition,” he said about the Eagles. “I don’t think it will hurt us at all.”

Brown led EA with 70 yards on nine carries and two touchdowns. Turner had 22 yards on six carries; and had two receptions for 92 yards and a touchdown.

Watts had 168 yards on 37 carries and three touchdowns. His overtime touchdown was from 10 yards.