Ready to line up 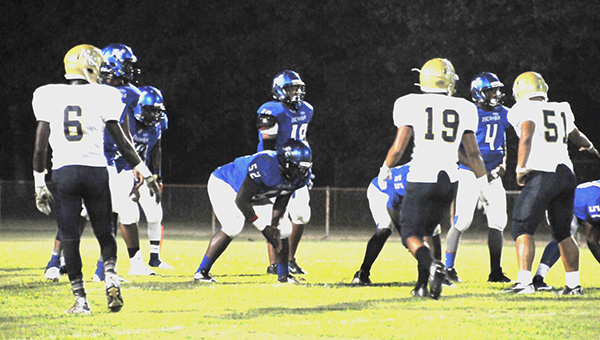 Escambia County’s defense is going to need to make sure it lines up correctly against Satsuma this week. | Andrew Garner/Atmore Advance

The Blue Devils are coming off a 34-14 victory over Hillcrest-Evergreen, which was their second win this season.

Satsuma (3-2) squeaked out a 33-27 win over Citronelle — ECHS’s jamboree opponent — last week. The Gators’ only region loss was to UMS-Wright two weeks ago.

“Satsuma is so fundamentally sound, and extremely good,” Young said. “They have some versatile athletes.”

Young said the Gators like to run a lot of formations on offense, and stressed that it’s vital for the Blue Devils to line up correctly.

“Their kids are disciplined and well coached,” he said. “They’re going to have two to three trick plays per game.”

Young said Satsuma quarterback Andrew Barfoot is a good runner and thrower, and it would surprise him to see some over-the-middle screen passes during the game.

At tailback, the Gators have Nicholas Kritner, and Peyton Reed at tight end as other threats.

“He’s the main target in the passing game,” Young said about Reed.

With it being homecoming week, there are a lot of extra curricular activities players are involved in.

Young said during the week, the coaches will be stressing the importance of staying focused on the task at hand.

“We know we’ll have a good crowd,” he said. “We hope we do our part, and present Atmore well.”

Northview to play tough Maplesville, Ala.

Playing a complete game is of the utmost importance for Northview as the Chiefs visit top-ranked Maplesville, Ala. on Friday... read more