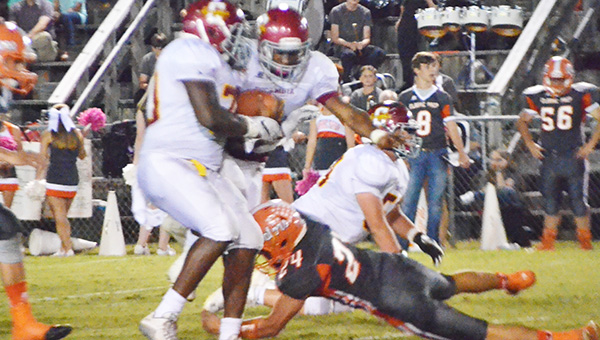 Fountain said it must have been because it was the first game EA shut out an opponent this season.

When it came to the win, Fountain said it was a big one because it secured a home berth in the first round of the AISA Class 2A state playoffs.

“That was a huge win for us as far as coming over here and getting a shut out,” he said. “It’s hard to get a shut out with the type of offense (Wing T) they had, and we played a good, physical game tonight.”
The Cougars (5-2, 3-0 in AISA Class 2A, Region 2) got on board early after a good opening drive in the first quarter.

Louie Turner, who accounted for three touchdowns on the night, scored his first with 8:08 left in the first on a 10-yard rush in the red zone. The PAT was blocked, and EA led 6-0.

The Cougars then stopped a long drive by the Gators (1-6), and took advantage on offense as Turner scampered for 71 yards to hit pay dirt. Jo Jo Carpenter converted the 2-point conversion, and EA led 14-0 with 1:08 left in the opening quarter.

As things started to settle in for the Cougars’ offense, their defense did a good job of stopping the elusive formation from CPS, keying in on players who ran the ball on each play.

EA went ahead by three scores late in the first half after Kainoa Gumapac connected with Turner on a 24-yard touchdown pass. With Gumapac’s PAT, the Cougars were ahead 21-0.

Late in the first half, EA could’ve gone up by four touchdowns, but silly penalties negated that chance.

Fountain said penalties are an area the boys need to work on correcting.

“Right before the half, we had the ball close to the goal line,” he said. “In the second half, we had a drive with a bunch of penalties. You’re never good when you do that. We seem to get the penalties from the same people. We’ve got to correct that somehow or the other.”
In the third quarter, the Cougars scored again after Gumapac caught an interception and returned it deep within Gator territory.

Carpenter, who did a lot of hard hitting, took it the rest of the way on a 17-yard rush.

Patrick McGhee put the final nail in the coffin in the fourth on a 15-yard rush with 5:32 to go.

Turner led EA with 159 yards on 10 carries and two touchdowns. Gary Campbell had two receptions for 28 yards. Gumapac went 4-for-9 for 44 yards, an interception and a touchdown.

Fountain said the final three games of the regular season are going to be good ones to play.

“We’ve got a team from Pensacola (Lighthouse Academy) we’ve never played before,” he said. “So, we don’t know much about them. The other two games are the two best teams in AISA — Autauga and Bessemer. We’ll test ourselves as a group.

“It’s something we’re looking forward to,” he said.

The AA game will decide who are the region champions.

“That’s what we need to focus on,” Fountain said.