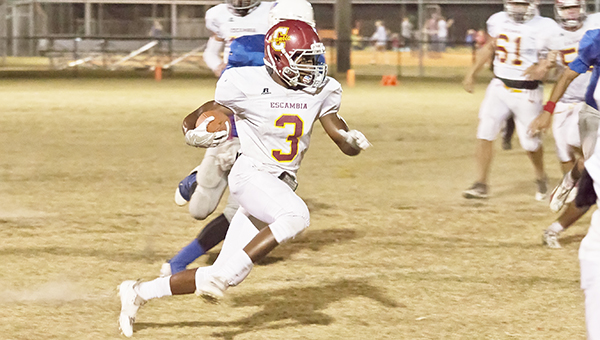 Escambia Academy couldn’t help that homecoming and senior night fall against the two best teams the Cougars will face this year.

The first team EA will face is top-ranked Autauga Academy this Friday for homecoming and for the region title. The second team is No. 2 Bessemer Academy next week for senior night.

“At the end of the season, a lot of things have to get done,” Cougars head football coach Hugh Fountain said. “We can’t help that both (homecoming and senior night) fall on this year against the two best teams on the schedule.

“We know what they are,” he said of AA. “Obviously, they’re not what you call a cake walk homecoming team. It is what it is.”

The sixth-ranked Cougars (6-2, 3-0 in AISA Class 2A, Region 2) are coming off a 39-0 team victory over Lighthouse Christian, Fla. Against LC, the Cougars put together a team win. Linemen Jamie Welker and Thomas Knight scored touchdowns, along with sophomore Jace Daniels, Fountain said.

“The team played pretty well,” the coach said. “It’s not too often that linemen score a touchdown in a game.”

“When you play a team like Autauga Academy, they’re very good on defense,” Fountain said. “They’re a strong defensive team, but they’re an offensive juggernaut.

“To keep pace, we don’t want them scoring their average,” he said. “It’s going to be critical that we play good defense.”

Fountain added that the Cougars must play well on all phases of the game.

“When you play better teams, all three phases are critical in this game,” he said. “I feel like we’ve shown steady improvement in every area as the season has gone on.”

Defensively, the Generals have Djay Gardner at middle linebacker. In addition, Jakerrius Wyatt will also pose a threat to the Cougars’ offense.

With it being homecoming week, Fountain said the players must be aware that the only thing that matters is the game itself.

“The banner building, and all the other things they do, don’t have any bearing on the game,” he said. “It’s how you prepare for the game. All those are the key things.”

If the Cougars win this week, this will guarantee them two home games in the postseason.

“Winning the region title is important to us,” Fountain said. “You wouldn’t have to worry about ever traveling in the playoffs. That has a lot of impact, just playing at home every game. We’d like to be assured of doing that.”