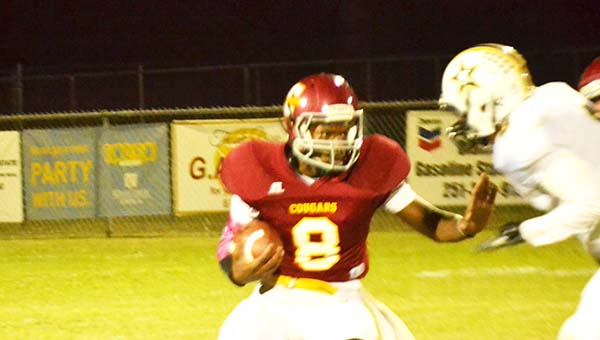 Mistakes in a back-and-forth game proved costly for Escambia Academy as the Cougars fell 41-34 to top-ranked Autauga Academy in a big region match up Friday night at Bachelor Field.

The Cougars and Generals traded scores throughout the entire second half, but it was AA’s dominant run game led by senior running back Derrick Dunigan that was the difference.

Dunigan finished the game with 223 yards on 41 carries and scored four touchdowns — three in the second half — for the Generals.

Offensively, EA made clutch plays when it had to, but didn’t on key downs.

“We made mistakes at critical moments that kept us from winning the game,” Cougars head football coach Hugh Fountain said. “I was proud of our effort, but not proud of our execution.

After the Generals scored their eventual game-winning touchdown with 31.3 seconds left in the game, EA had the ball on the 44-yard line, and made a good try at the end zone.

Cougars senior quarterback Kainoa Gumapac started with a 15-yard run, but didn’t get any where on the next few plays as the clock ran out.

Earlier in the fourth quarter, Gumapac made a clutch 16-yard third-down-and-long conversion throw to Justin Daw that set up a 28-yard touchdown pass to Fred Flavors to tie the game at 27-27.

Another big play occurred for the Cougars a short time later.

“We had big plays,” Fountain said. “We played hard. To win it all, you’ve got to make sure you execute it all. I’m disappointed in the loss always.

“It’s a winnable game, but you can’t make mistakes,” he said.

Dunigan scored his first touchdown of the second half on a 15-yard run with 9:14 left in the third. He added his second on a short 4-yarder with more than 3 minutes in the game, and then punched the game-winner from a short 6 yards out with 31.3 ticks left.

The Cougars trailed a manageable 14-7 at halftime, and came out firing in the third quarter.

EA put together a great drive, which ended in a Louie Turner 29-yard touchdown run at the 10:52 mark. With 31 seconds left in the third, McGhee tacked on his first rushing touchdown from 4 yards to tie the game for the first time at 20-20.

In the first half, AA sophomore quarterback Tripp Carr found Dunigan from 11 yards, and Dunigan scooted in from the 1 to help the Generals take a 14-0 lead.

Turner cut the lead to seven in the second quarter on a 4-yard rush.

The Cougars will host the first round of the AISA Class 2A state playoffs and will play Evangel Christian.

Next week, EA will play host to Bessemer Academy for the regular-season finale.

Fountain said it’s not easy to forget a loss like this one.

“This one is going to eat you in your crawl a little bit because youcould possible have to play them again,” he said. “I feel like that you just take this one and learn from it. We’ve had really tough games this year, and really and truly we could’ve come out close. This team has a lot of character. I’m proud of their effort.”