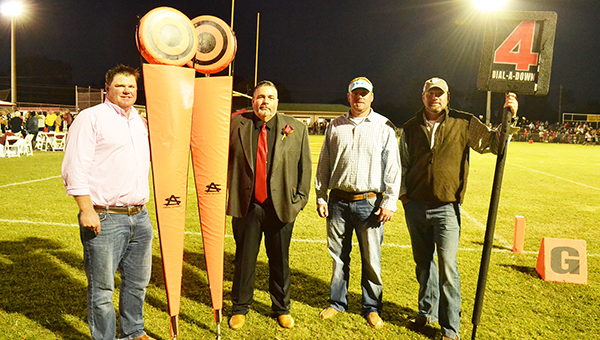 Allen Smith, Justin Beasley, Jace Beasley and Robbie Stanley know what it’s like to be in a gang.

The four have volunteered to be the chain gang for Escambia Academy home football games for a combined 14 years, and each say they love their job.

Smith, the chain gang coordinator, said this is his 10th year of organizing the group. The Beasleys and Stanley have been on the gang for two years each.

Smith said he started working on the chain gang because EA didn’t have somebody to fill in on the group.

“I volunteered that night, and the next year,” Smith said. “Coach (Heath) Gibson, back then, asked me to start putting it together every year.”

Every home game, the four walk up and down the visitor’s sideline with their different jobs as they follow the play of the game.

Smith and Justin Beasley work the 10-yard line sticks; Stanley works the down marker; and Jace Beasley usually marks the clip, which notes the halfway point on first down.

Smith said a special memory for him was working the sideline while his son, Nate, played his senior year in 2014. He said it was an awesome experience to be able to watch every play at home.

During games, the gang typically hears the visitor’s coaches talk.

“Some of them don’t seem to like us,” Smith quipped. “Some like us. They have different personalities.”

All four said it isn’t hard being the chain gang. In fact, the job allows each to view the game from a different perspective.

“It’s the best seat in the house,” Smith said.

“You’re right on the field, and most of the time you’re looking down the line of scrimmage,” Stanley said.

All four chain gang members said they haven’t missed a game, whether it was home or away.

Smith said during the Lighthouse Christian road game, he had to fill in on the chains, which was a first being on EA’s sideline.

“It was different with our guys on our side,” he said.

When asked what were the most grueling games, Smith went back to 2014, when EA won its last championship.

“All of the playoff games were here,” he said. “My son was a senior. That was a great football team that year. To be right there on the sideline when he’s playing was great.”