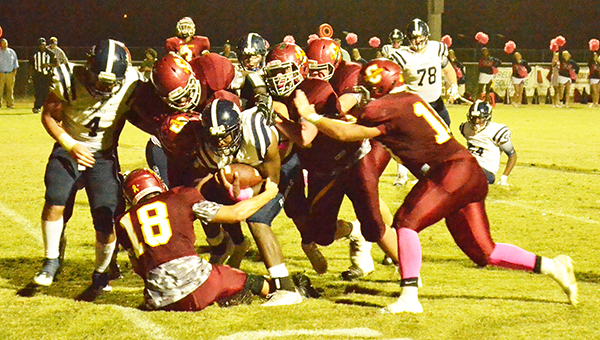 The Cougars put together a solid effort on both sides of the ball, running an offensive gash into the Rebels’ defense. EA ran 78 plays on offense compared to Bessemer’s 39.

“The key to this game was that we didn’t put points on the board when we had our opportunities,” EA head football coach Hugh Fountain said. “I think three times we were inside the 5-yard line, and we didn’t score any points.”

During the third quarter, the Cougars took a big blow as they lost senior offensive lineman Trae Lee due to an ankle injury. Lee also plays at defensive end.

The Cougars and Rebels remained scoreless after the first quarter of play.

EA, driving on its first possession of the game, which went into the second quarter, capped a 10-play drive with a 10-yard Patrick McGhee touchdown run with 10:59 left in the first half. With the point after attempt good from Kainoa Gumapac, the Cougars led 7-0.

EA stopped the Rebels on their next offensive series, but an attempt to go for it on fourth down didn’t pave out as the ball turned over on downs.

The Rebels took advantage with a big 56-yard touchdown rush from Thomas Sims to tie the game at 7-all with 4:59 left in the half.

Fountain said he knew that it gave the Rebels some momentum after not converting on the fourth-and-five play.

“For us, we’re trying to learn how to play in the clutch, and we didn’t do well in clutch moments in this particular game, even though we had a great effort and guys plays their heart out,” he said. “I really was very proud.”
BA tacked on another score with less than 40 seconds lef tin the half on a 31-yard rush from Jason Rucker to go up 14-7 at the break. 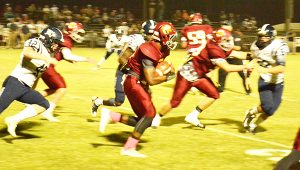 McGhee and Flavors took over most of the running duties for the Cougars in Louie Turner and Kris Brown’s stead. Brown did play tonight and made some significant runs.

Flavors, using his quickness and speed, put together a notable performance, rushing for 82 yards on 14 carries.

McGhee had 121 yards on 20 carries and two touchdowns.

“We put a lot on their shoulders tonight being they are so young,” he said. “I thought they responded well. We told them to run north and south. Louie should be back next week. JoJo (Carpenter) did a good job for us at fullback. He had a couple good blocks.

“We just didn’t make the clutch plays,” he said.

The Cougars started the third quarter with the ball and drove the length of the field to the 3-yard line, where they ended up not converting for a score.

While down by 14 point, the Cougars never quit.

EA’s offensive drive late in the fourth allowed McGhee to score his second TD from 12 yards with 1:33 to go in the game.

The Cougars tried for an onside kick, but BA recovered.

With the game in hand, EA’s defense didn’t let up, stopping the Rebels on their last possession before the visiting team took a victory knee.

Over the last two weeks, EA has faced the top two-ranked teams in AISA, and there has been a touchdown differential in each result.

Next week, the Cougars play host to Evangel Christian (4-5) in the first round (quarterfinals) of the AISA Class 2A state playoffs.